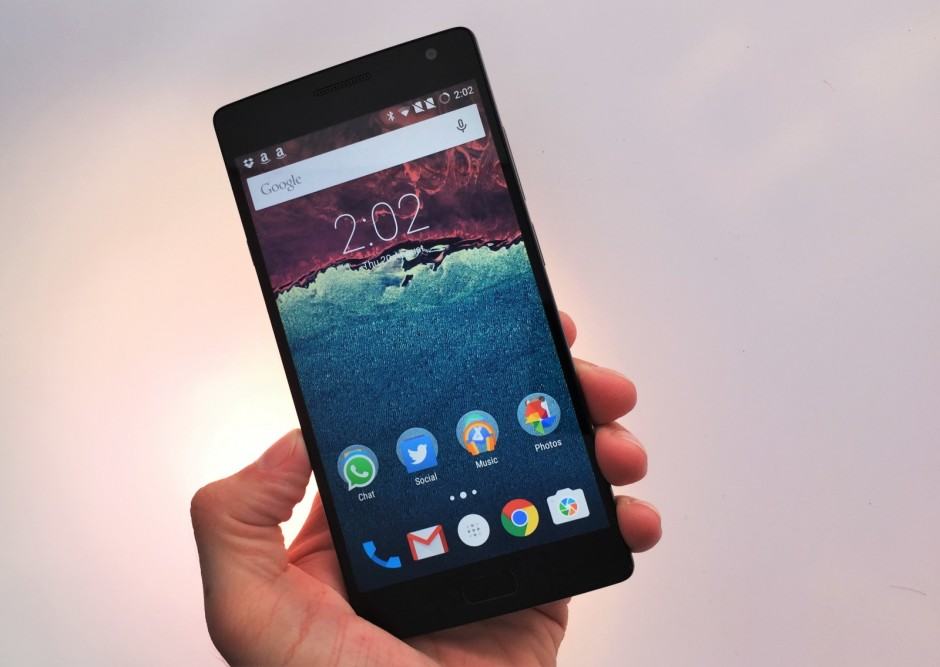 The new OnePlus 2 is faster and prettier than its predecessor. Photo: Killian Bell/Cult of Android

The latest “flagship killer” from Chinese startup OnePlus is getting even more attention that its predecessor. And rightly so: The OnePlus 2 is better looking and more advanced than the OnePlus One, with a faster Snapdragon 810 processor, up to twice as much RAM, and a new 13-megapixel camera sensor.

The device also comes with OnePlus’ latest OxygenOS software pre-installed, which offers a pure Android experience with some added extras.

Currently, you can’t get your hands on the OnePlus 2 without an invite, but I was lucky enough to obtain a review unit. After using it for two weeks, its gorgeous design is one of my favorite things about this device. You have to see it (in person) and feel it to really appreciate it — pictures just don’t do it justice.

The aluminum frame around the phone’s edges feels incredibly solid. The removable back sports the same textured finish as the Sandstone Black OnePlus One. It’s a little difficult to take off at first, but there is no removable battery so you’ll only need to take it off to swap out your SIM card or apply one of the neat StyleSwap back panels.

The metal accent around the OnePlus 2’s camera and LED flash is also a nice touch, as are its metal buttons. There’s a physical switch on the left side of the OnePlus 2 that’s inspired by the iPhone’s mute switch, with three positions that let you jump quickly between Android’s three notification modes: all notifications, priority notifications, and alarms only. 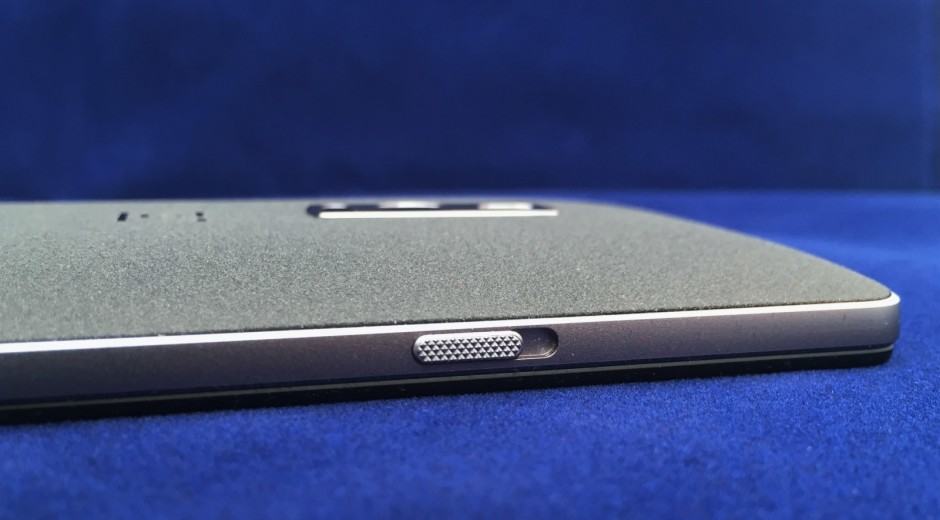 The front of the OnePlus 2 is free of branding. Unlike its predecessor, it has a home button with an embedded fingerprint scanner. It’s not a traditional button, though; although it looks like one in photos, it’s actually capacitive, so there is no tactile feel when you press it.

This can take some getting used to — particularly if you’re switching from a device with a tactile home button — but it works well. If you have the fingerprint scanner enabled (more on this later), you simply hold your finger on the button to wake and unlock your OnePlus 2 in an instant.

If you don’t like the capacitive buttons, you can use virtual, on-screen buttons instead. The fingerprint scanner will continue to work as normal when unlocking your device.

The OnePlus 2 feels a little weighty when you first take it out of its box — though that could be because I’ve been using a lightweight Galaxy S6 for several months — but after a day or so it feels no different than any other phone. If anything, the weight adds to its solid, well-built feel.

It might not have a metal unibody like the iPhone, or a Gorilla Glass back like the Galaxy S6, but the OnePlus 2 certainly looks like a high-end smartphone. It’s a massive improvement over its predecessor, and I think OnePlus fans are going to love it. I certainly do. 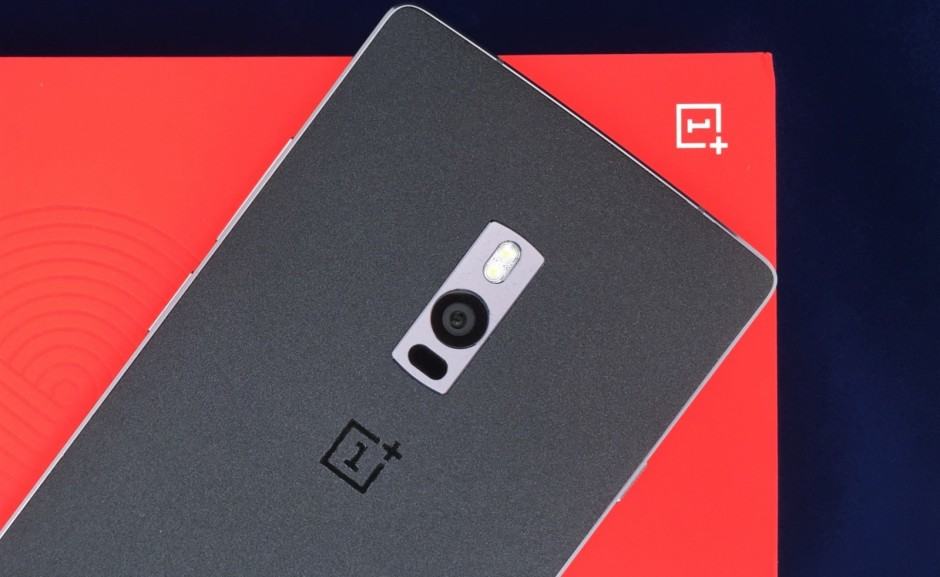 The metal accent around the OnePlus 2’s camera and flash is a nice touch. Photo: Killian Bell/Cult of Android

Just like its design, the OnePlus 2’s display is an improvement over the previous model. It offers the same 1920×1080 (Full HD) resolution, but it brings better color saturation and viewing angles, and increased brightness.

In fact, the OnePlus 2’s display gets really bright, which makes it ideal for outdoor use. You’ll have no problem snapping photos on sunny days, then enjoying your shots without having to step indoors or shield the display with your hand.

It isn’t always bright, though; the OnePlus 2’s display also gets incredibly dim, so reading or scrolling through your Twitter feed in bed at night is comfortable even with all the lights off.

I’ve seen a lot of people complaining that the OnePlus 2 didn’t get a Quad HD display like other 2015 flagships, and at first I was a little disappointed about that, too. But after switching from a Galaxy S6 with a Quad HD panel, I don’t miss it at all. 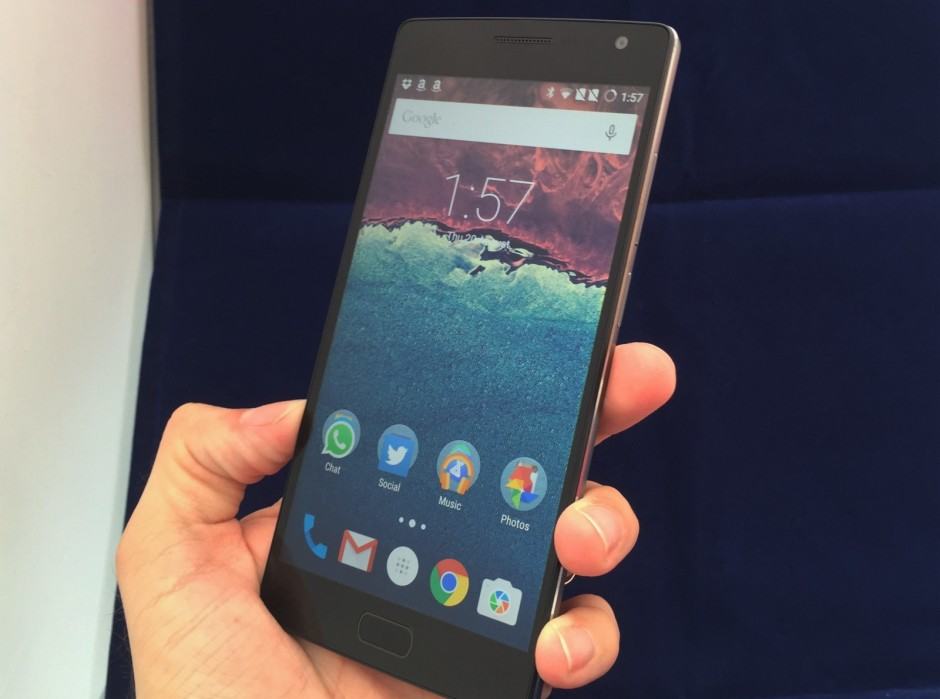 The OnePlus 2 has a great display. Photo: Killian Bell/Cult of Android

Like any other 1080p smartphone display, the OnePlus 2’s is incredibly sharp, and your naked eye cannot distinguish individual pixels. Whether you’re watching an HD movie, playing bright and beautiful games like Monument Valley or just enjoying your photos, the OnePlus 2’s display is a pleasure to look at.

Sure, a Quad HD display is nice when you’re looking at Quad HD content — but for almost everything else, it’s unnecessary, and more pixels burn down your battery faster.

The OnePlus 2 is powered by Qualcomm’s latest Snapdragon 810 chip, which has been in the news a lot since it made its debut — and not always for positive reasons. But thanks to some modest throttling, its overheating issues simply aren’t present in the OnePlus 2.

You will feel some warmth when carrying out processor-intensive tasks, like gaming or streaming HD video, but the OnePlus 2 doesn’t get abnormally warm — certainly no warmer than my Galaxy S6 or iPhone 6.

Coupled with the 4GB of RAM in the 64GB model we tested, the Snapdragon 810 makes light work of switching between multiple apps, streaming HD video, and playing the latest Android games. It also helps make the OnePlus 2’s OxygenOS software incredibly smooth. 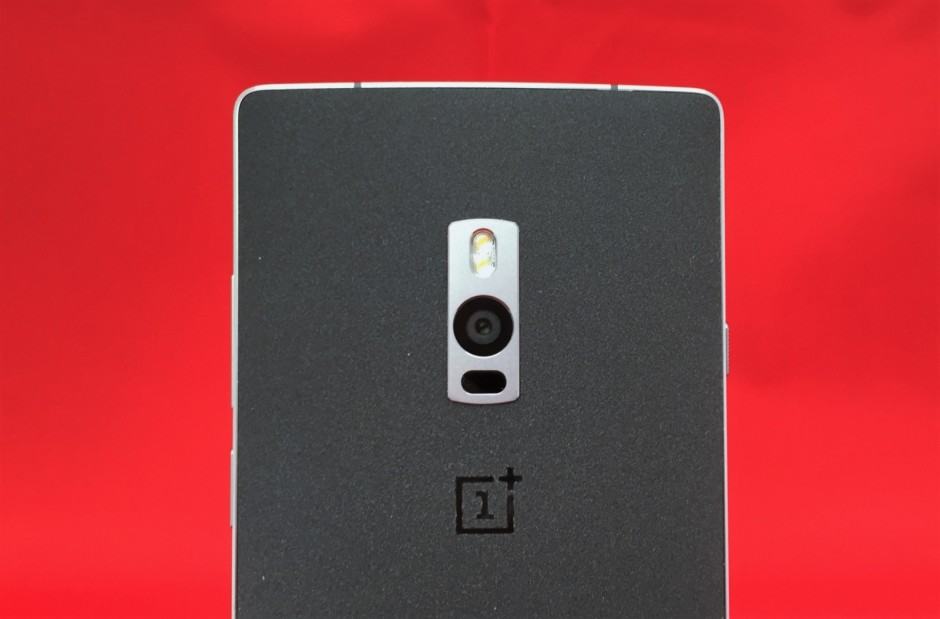 The OnePlus 2 gets warm, but not too warm. Photo: Killian Bell/Cult of Android

When you run the OnePlus 2 through AnTuTu benchmark tests, it doesn’t perform quite as well as its rivals — not even those powered by the same Snapdragon 810 processor. In my test, the device scored just under 43,000 points, which puts it behind the HTC One M8 and the Samsung Galaxy Note 4.

But benchmarks aren’t always a true representation of the performance you can expect when carrying out day-to-day tasks. Having used the OnePlus 2 as my primary device for almost two weeks now, I haven’t experienced any performance problems whatsoever. Navigating menus and multitasking is actually smoother on the OnePlus 2 than it is on the Galaxy S6, and you get the same experience inside the latest Android games.

The only app that lags sometimes is the camera app — and I’ll go into this in more detail in the Camera section of this review — but that’s software rather than hardware, and OnePlus tells us improvements are on the way.

The OnePlus 2’s 3,300-mAh battery has gotten me through each day relatively easily, usually with plenty of life to spare. I don’t think battery life is as good as it was on the OnePlus One — which offered the best battery life I’ve seen from an Android device to date — but it’s certainly very good. 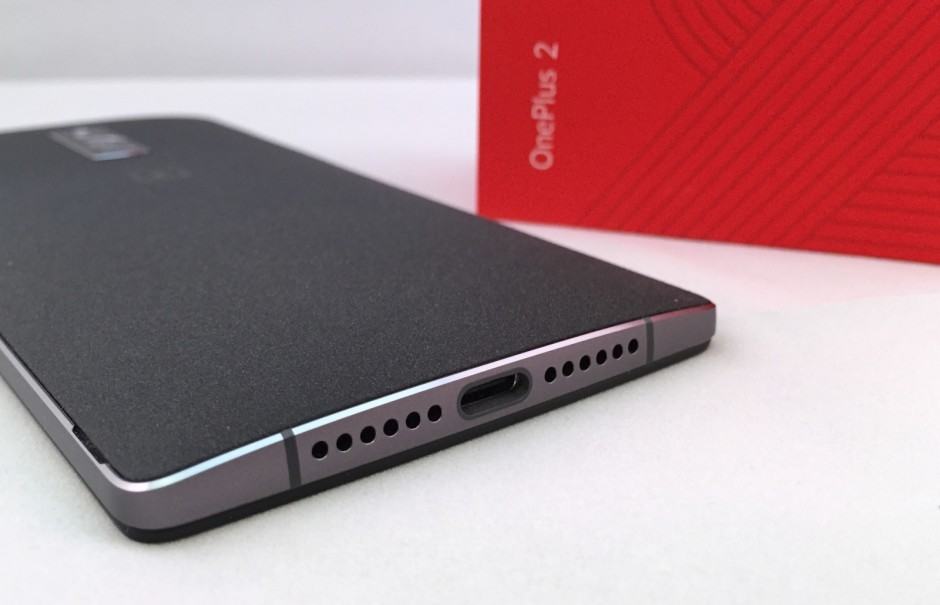 The OnePlus 2 is the first Android device with USB-C. Photo: Killian Bell/Cult of Android

The usual things like heavy gaming and streaming video over 4G will have their usual impact, but you can enjoy a normal day of social networking, snapping photos, listening to music and taking calls without having to worry about reaching for the charger before bedtime.

There is one downside to the OnePlus 2’s big battery, however: Unfortunately, the device does not offer fast-charging technology, so you’ll be waiting about three hours for it to top off from 0 percent. This is a real pain if you let the battery die and need a quick charge before heading out, because you’re not going to get it.

While we’re on the subject of charging, I wanted to talk briefly about USB-C, which comes to Android for the first time with the OnePlus 2. Having gotten used to Apple’s Lightning connector with my iPhone and iPad, it’s great to have another reversible plug on the OnePlus 2.

You’ll need to buy new cables, because that drawer full of micro-USB cables is going to be no good to you anymore, and having just the one that comes with the OnePlus 2 is a pain. But at just $5 a pop from OnePlus, USB-C cables don’t have to be expensive, and they’re going to come in handy later as more manufacturers embrace the technology.

The camera can make or break a smartphone for me; it doesn’t matter how fast or how pretty the device is, if it doesn’t have a decent camera that does it all, it’s not going to be good enough for me long-term. Fortunately, the OnePlus 2 takes excellent photos … most of the time. 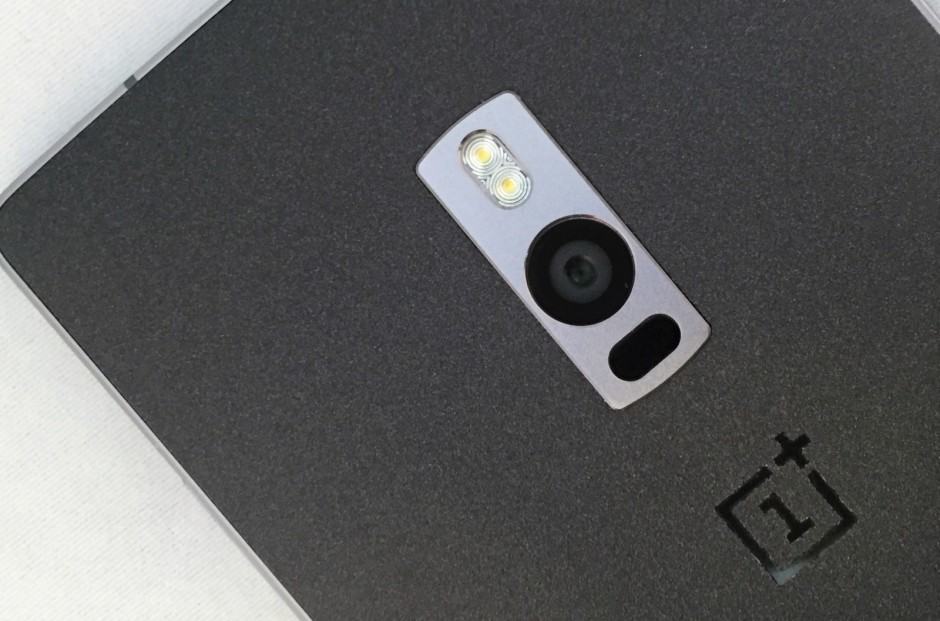 In good lighting conditions, its 13-megapixel sensor with f/2.0 aperture captures bright, beautiful photos that are incredibly crisp and colorful (the video’s great too). It’s also surprisingly good at producing a shallow depth of field when you’re photographing subjects in the foreground.

But the OnePlus 2 camera exhibits some weaknesses. It’s not so good in low-light conditions, which cause the images it produces to become too dark and grainy. You’ll also have trouble capturing moving subjects, in both good and bad light, because focusing and capturing images can be incredibly slow — despite the camera’s laser-assisted autofocus.

As I mentioned before, this is due to OnePlus’ camera software, and the company promises it’s going to get better. Until then, you can enjoy excellent shots of still subjects on a sunny day, but you’ll probably want to avoid using the OnePlus 2’s camera at night.

Here are some untouched images taken with the OnePlus 2:

The OnePlus 2’s speaker is perfectly loud and clear enough for conference calls, and it’s even decent when listening to music or watching video — if you enable the built-in Audio Tuner, which lets you quickly switch between different audio profiles to suit the genre of music you’re enjoying. It certainly can’t compete with HTC’s BoomSound speakers, but it’s better than most.

However, I really don’t like how it sounds when listening to podcasts and audiobooks. I’ve tried the different audio profiles, and even disabling the Audio Tuner altogether, which helps a little bit — but it still sounds somewhat sharp and tinny when listening to voices.

The OnePlus 2 comes with OnePlus’ latest OxygenOS software pre-installed, and fans of pure Android are going to love it. It has its own launcher and some third-party tweaks, but they’re all welcome ones, and they don’t bog down the operating system like Samsung’s TouchWiz or HTC’s Sense. 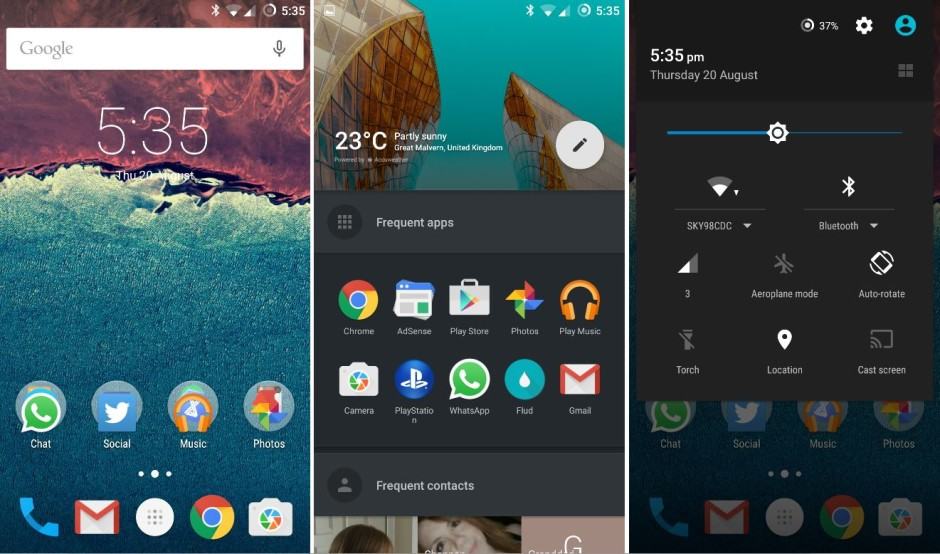 OxygenOS on the OnePlus 2. Screenshots: Killian Bell/Cult of Android

I really like OxygenOS’ Audio Tuner and its Quick Settings menu, which can be customized and rearranged. I’m also loving the launcher’s baked-in Shelf feature, which and puts your favorite apps, widgets and contacts just one swipe away. However, using the OxygenOS launcher with Shelf sacrifices Google Now.

Overall, OxygenOS is terrific — but it comes with some annoying bugs. I’ve had to stop using the timer for my morning coffee because it simply will not disable until I force-restart the device, and on two occasions all my apps disappeared from the home screen.

The most frustrating bug affects the OnePlus 2’s home button and fingerprint scanner. The home button stops working at random; it cannot be used to unlock the device or exit out of apps. This happens on a regular basis — countless times a day — and it drives me insane.

The only workaround for now is to use the virtual, on-screen buttons, and input a PIN when the device won’t unlock with the fingerprint scanner. Hopefully there will be a fix for this sooner rather than later, because it’s the one thing that can make using the OnePlus 2 infuriating. 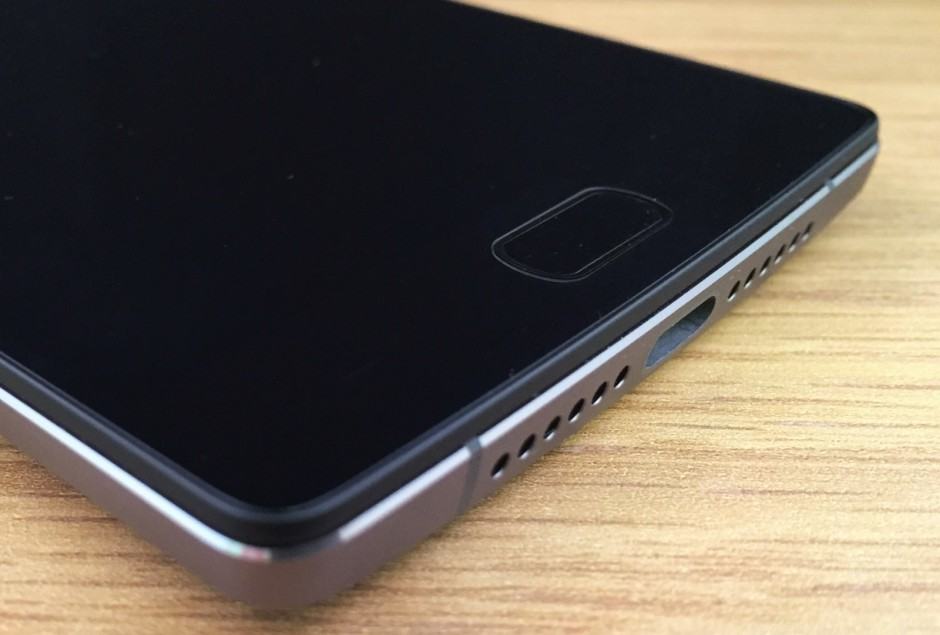 The OnePlus 2 isn’t perfect; it’s missing some important features, like NFC and wireless charging, that some smartphone users can’t live without — and that makes it a bad option for them. But for everyone else, this is a tremendous smartphone for the price.

At just $329 off-contract, the OnePlus 2 delivers superb performance, impressive battery life, a pure Android experience and great design. If you’re lucky enough to get an invite before the OnePlus 3 gets here, you’d be crazy not to use it.

Note: The OnePlus 2 comes unlocked and is compatible with AT&T and T-Mobile in the U.S., but not Sprint or Verizon.