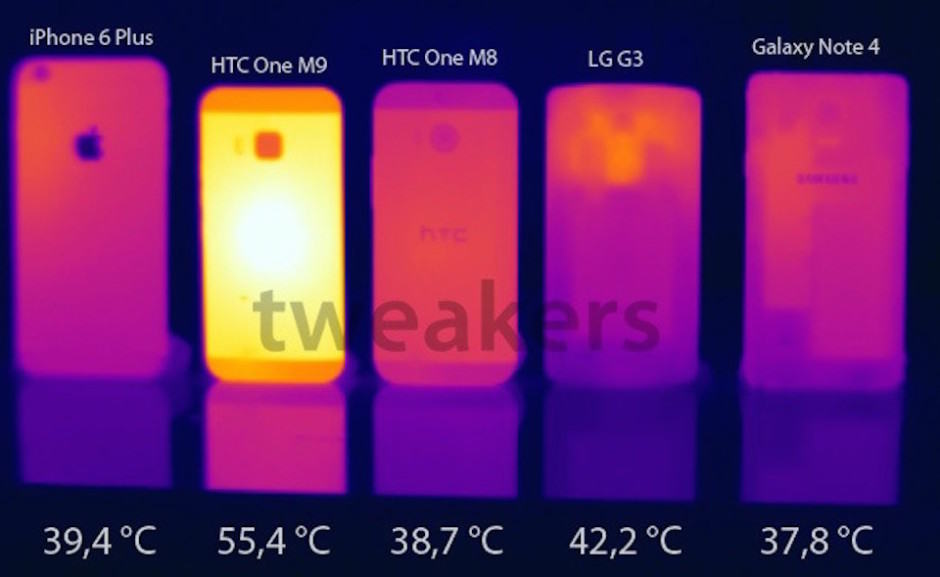 The One M9 gets hot, hot, hot. Photo: Tweakers.net

Samsung snubbed Qualcomm’s latest Snapdragon 810 chipset in favor of its own Exynos 7 — reportedly due to overheating issues. And while rivals have spoken out to back the chip, it seems the South Korean company may have been onto something.

According to Dutch blog Tweakers.net, One M9 was running the GFXBench benchmarking application, which pushes devices to their limits to measure processing and graphics performance, power consumption, and more.

When you consider other flagship devices — including the iPhone 6 Plus, the LG G3, the Galaxy Note 4, and last year’s One M8 — hover around 104° Fahrenheit (40° Celsius) during the same tests, that’s a considerably high figure.

It’s hot enough to make the One M9 uncomfortable to use — particularly for extended periods. And it’s worth remembering that HTC’s latest flagship isn’t the only high-end device that’ll launch this year with the Snapdragon 810; there will be plenty more from various manufacturers, including LG, Motorola, Sony, and more.

“For the sake of comparison, that’s the temperature of a high-end desktop GPU under the stress of an intense, high-performance game,” Android Police points out, “and those cards are designed to take that heat, with custom enclosures, heatsinks, and fans to channel hot air away from the computer.”

Strangely, the One M9 did not shut down while running at this heat. But there are some caveats we should take into account.

For instance, these temperatures won’t be totally accurate because thermal imaging cameras aren’t totally accurate. Tweakers also notes that the One M9 doesn’t get quite as hot under normal use, and that the software running on their handset isn’t final.

It’s clear from the image above that the One M9 — at the Snapdragon 810, at least — has the potential to reach excessive temperatures, then, but HTC may have been able to improve things with more recent versions of its software.

With that said, we probably shouldn’t read too much into this until further tests are done on final versions of the device sold at launch.