The Z10’s display is possibly my favorite feature.

The Z10’s display is possibly my favorite feature — it’s beautiful. It boasts a 768×1280 pixel resolution, at 355 pixels-per-inch. That’s more pixels-per-inch than the iPhone, and more than the HTC One XL, which has one of the best smartphone displays on the market. This means incredibly sharp text, and crisp photos and videos. 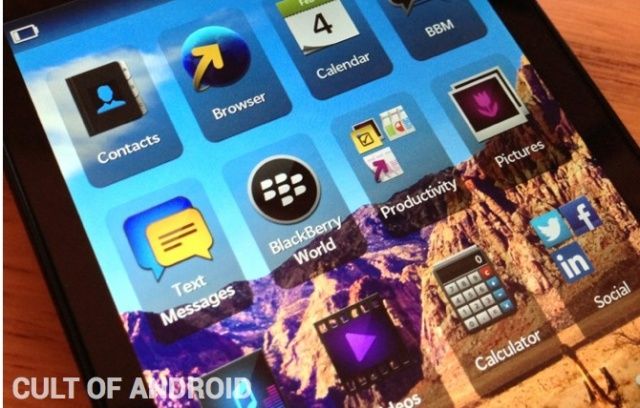 Pixels aren’t everything, of course, but the Z10 also offers bright, vivid colors, and good contrast. It’s plenty bright enough to be usable on a sunny day, and the viewing angles are very good. If you tilt the device up or down far enough, you will notice that a yellow tint becomes apparent — but no one uses their smartphone at these angles anyway, so it should never be an issue for you.

It’s worth noting that the Z10’s display is not made from Gorilla Glass like most of today’s smartphones. We’re not sure why BlackBerry chose not to use it, but it makes us wonder whether the Z10’s display will be a little more fragile than other smartphone displays. I didn’t fancy throwing mine on the floor to test it out, so you’ll have to wait for the customary drop tests to find out.

The other thing to note about the Z10’s display is that it’s not flush with the plastic bezel at the top and bottom of the device. Instead it’s recessed between an ever-so-slightly protruding frame. That’s certainly not an issue — at least not for me — but it is somewhat different to other smartphones.

I’ve found the Z10 to be very snappy and responsive in almost every way.

The Z10 packs a 1.5GHz dual-core Snapdragon S4 processor and 2GB of RAM, which combine to provide a silky smooth experience that rarely stutters or lags. While we’ve become accustomed to quad-core processors in other high-end devices, the Z10 certainly doesn’t feel as though it suffers without one.

I’ve found the device to be very snappy and responsive in almost every way. Switching between apps is a seamless experience, as is opening and using the camera. Flicking through web pages is also smooth, even when loading videos, while gaming in Angry Birds Space or Pix’n’Love Rush — the only two games I’ve installed so far — has been faultless.

If you’re switching from a quad-core smartphone or the A6-powered iPhone 5, I don’t think you’ll notice much of a difference at all.

I have noticed some apps appear to stall a little upon opening, but this happens rarely, and I put it down to early teething problems with the software — more on this below — rather than a hardware performance issue. The same goes for the Z10’s browser performance, which I found to be a little bit slower at loading pages then my iPhone 5 or my Nexus 4. It’s not a dramatic difference, and you may never notice it, but it’s definitely there.

You’ll will, however, notice the Z10’s boot-up times, which are painfully slow at more than one whole minute. If you can, avoid turning the device off as much as possible. 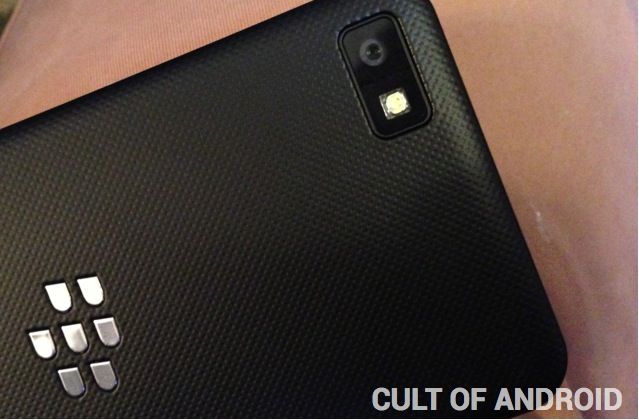 The Z10’s rear-facing camera is an 8-megapixel affair that boasts autofocus, an LED flash, and 1080p video recording. I’ve found it to be mostly very decent, but it’s not perfect. I’ve been spoiled by the iPhone’s camera — which is one of the best on a smartphone — and I often have a hard time getting used to others. That’s something you’ll want to bear in mind if you’re thinking of switching from iOS.

As I mentioned above, the camera is snappy, and it will allow you to snap shots in quick succession, and switch between different shooting modes without any delays. In good light, stills taken on the Z10 are bright and crisp, and they offer good contrast and color. You certainly won’t have any problems with photos taken outside on a bright day.

Even in a moderately light environment noise appears to be an issue with the Z10’s photos.

In low light situations, however, the Z10 doesn’t do quite as well. It does an okay job of increasing the ISO enough so that you can actually see something, but photos taken in low light aren’t sharp, and they’re very noisy. Even in a moderately light environment noise appears to be an issue. The Z10 doesn’t offer an HDR mode, either.

The Z10’s flash is pretty good at taking shots up-close, however. In fact, in some cases I’ve found it does a better job than the iPhone 5 and the Nexus 4. Its range isn’t all that great, though, so you don’t want to be too far away from your subject. 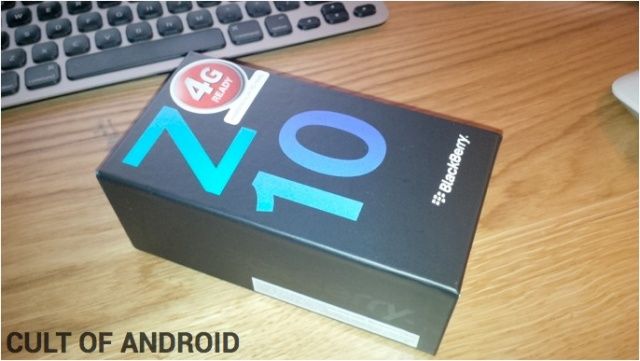 A photo taken with flash.

The 2-megapixel front-facing camera is capable of recording 720p video, and this is okay, too. Once again, in a well-lit environment it’ll take some pretty nice stills, but they become dramatically worse as the light decreases. You’ll certainly be able to hold some good video calls with the Z10, however, and let’s face it, that’s all you’ll really use the front-facing camera far.

The Z10’s camera software is interesting. It offers a number of scene modes, including auto, action, whiteboard — intended for taking pictures of text — night, and beach or snow. I used it on auto most of the time, and never felt the need to change that.

The Z10’s Time Shift mode is great for taking pictures of people.

You can switch between 16:9 and 4:3 aspect ratios, and you can also tell the rear-facing camera whether to record in 1080p or 720p. This is handy if you’re trying to conserve your storage, and you don’t mind losing a bit of video quality to reduce their file sizes.

The Z10 offers a really nifty Time Shift mode that’s great for taking pictures of people. It captures a number of different shots all at once, and then allows you to dial through all the different faces to choose the best. If your child looks away halfway through the shot, for example, or someone closes their eyes, you can simply dial back to the point at which they were looking at the camera. 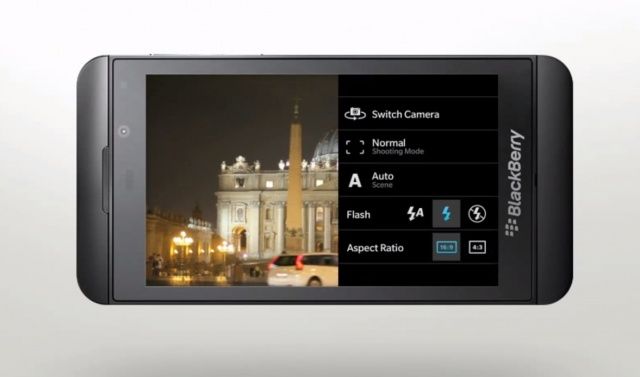 One of the things I had trouble getting used to was using the focus. There’s no virtual button to capture shots on the Z10 — you simply tap the screen in any place, or use the volume keys. This can be handy, but it means you can’t tap on different parts of the screen to focus on different areas. Instead, you have to tap and hold on the reticle and then drag it to a different place. This takes time, and could mean you’ve lost your shot before you had a chance to focus on it.