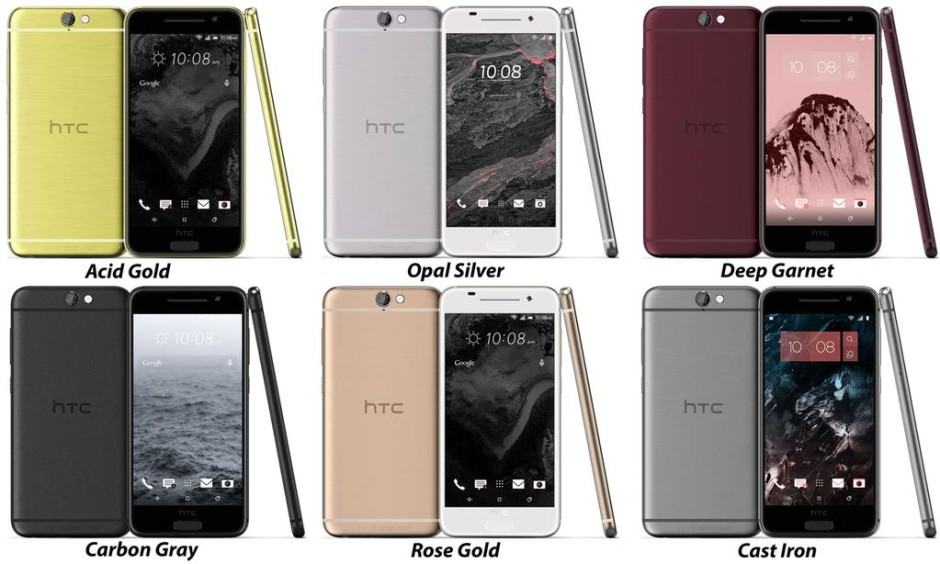 HTC’s upcoming iPhone clone, the One A9, has leaked out again ahead of its official unveiling.

A new press image confirms the device will be available in six colors, with gigantic bezels above and beneath its display that somewhat spoil its otherwise attractive look.

The image above was posted to Twitter by reliable leaker Evan Blass (@evleaks), so we have no reason to doubt its authenticity. We’ve already seen the One A9 a number of times before, of course, but this is by far the clearest image to date.

It’s pretty staggering how closely the One A9 copies the iPhone 6. Cover up the HTC logo on its back and I bet the average person would think it was an Apple device. Move the camera and flash over slightly and it’s almost a carbon copy — especially in Rose Gold, Opal Silver, and Cast Iron.

The One A9 doesn’t look too dissimilar to an iPhone from the front, either, though there are more differences on this side. The most noticeable is the strangely large bezels above and beneath the One A9’s display, which seem a little excessive.

Many HTC fans have complained about the oversized bezels on the One M7, One M8, and One M9, and it’s a shame HTC hasn’t been able to eradicate them. It doesn’t help that the company insists on putting its logo beneath the display when it’s really not necessary.

The One A9 is a very attractive phone, but those bezels will surely put some consumers off. Fortunately, the handset does boast some nice specifications — for a midrange smartphone, at least — that make up for it.

In addition to a 5-inch Full HD display, the One A9 is expected to offer a Snapdragon 617 processor, 2GB of RAM, 16GB of storage, and a 13-megapixel rear-facing camera. It will also have HTC’s trademark UltraPixel sensor on its front, a microSD card slot, and a fingerprint scanner.

Blass expects the One A9 to get its official unveiling in November — not at HTC’s September 29 event as previously reported. A recent report also claimed the device would come with Android 6.0 Marshmallow and Sense 7 pre-installed.