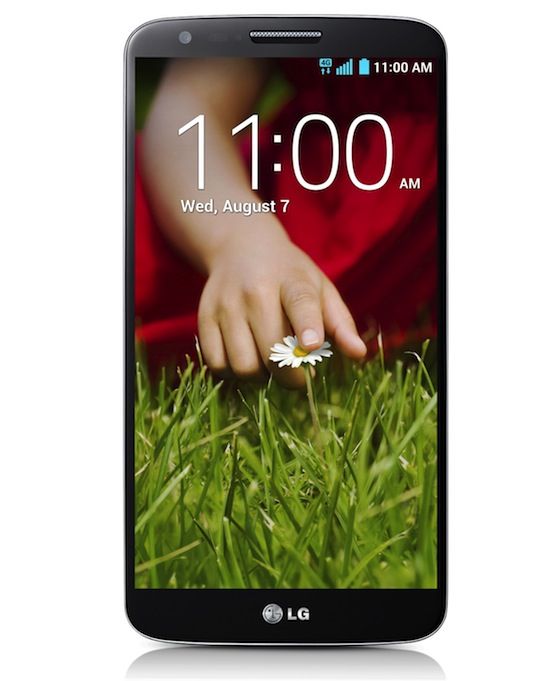 We may have already seen the LG G2’s official press shots, but at an event in New York City this morning, the flagship handset just got its official unveiling. As expected, the device offers a 5.2-inch 1080p display, which is coupled by a quad-core Snapdragon 800 processor, 2GB of RAM, and a 13-megapixel rear-facing camera.

LG calls the G2 the “most ambitious phone in its smartphone history,” but does it have what it takes to compete with the Galaxy S4, the HTC One, and other high-end Android handsets?

The G2 actually looks a little similar to the Galaxy S4 head-on, as we noted earlier today, but its thinner bezels above and below that gorgeous display make it a little prettier. It also has no physical home button like the Galaxy S4, so you’ll find virtual buttons at the bottom of its display instead.

It does have a special button on its back, however, which sits just beneath the camera. You can tap it to sleep/wake the device, and move it back and forth to adjust the volume. You can also use it to snap photos, and quickly launch your favorite apps.

Some of the G2’s software features — which are also Galaxy S4-inspired — include Answer Me, which automatically answers your phone when you pick it up; QuickRemote, which uses the built-in infrared sensor to provide you with a remote control for your electronic devices; and Plug & Pop, which suggests apps and features you may wish to use when you plug in headphones or a USB cable.

The G2 is the “best smartphone on the planet,” according to LG. Its 5.2-inch display promises to be the sweet spot between phone and phablet, while its rear key provides better one-handed use in an effort to prevent you from dropping your phone while using buttons on its side, or its top.

The G2’s edge-to-edge IPS display also offers “graphic RAM,” which promises to reduce strain on battery life and provide you with more usage in between charges, while its rear-facing camera is the world’s first 13-megapixel sensor with optical image stabilization.

The G2 will be available in black and white initially, and it’ll launch on over 130 carriers worldwide — including all four major carriers in the U.S.