UPDATE: There are some screenshots of BBM for Android at the bottom of this post.

By now you’re probably already aware that BlackBerry Messenger is coming to Android and iOS this summer, but BlackBerry has been pretty quiet about its release since it was announced. We don’t know exactly when the app will arrive — though we do know it’ll be by the end of September.

But the Canadian company has now begun making the BBM beta for other platforms available via the BlackBerry Beta Zone.

For those who are unaware of the BlackBerry Beta Zone, it’s a platform available to BlackBerry users that allows them to download and test pre-release software before it makes its public debut. Testers can then submit feedback and help BlackBerry make improvements.

Usually, the BlackBerry Beta Zone is exclusively for apps built for BlackBerry, or desktop applications built to work with BlackBerry smartphones. But some users have begun receiving emails that invite them to download the BBM beta for Android and iOS — as you can see from the screenshot below, which was obtained by BlackBerryOS. 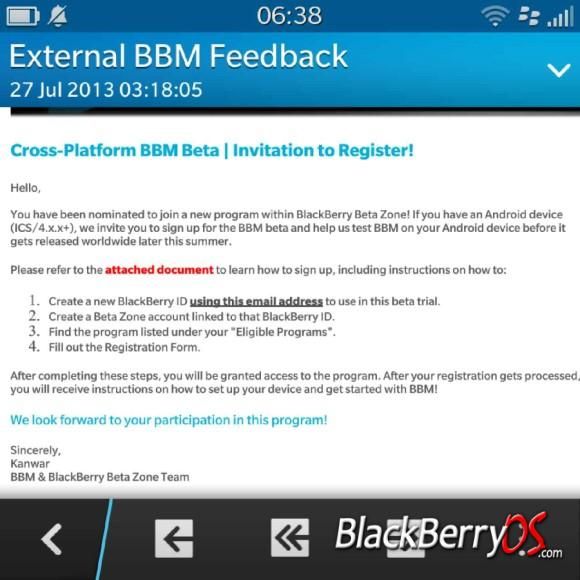 The beta isn’t open to everyone — I’m a BlackBerry Beta Zone member (honestly!) and I can’t access it — but BlackBerry appears to be sending out invites to a select few. The app is compatible with Android devices running Android 4.0 Ice Cream and above, while the iPhone version is compatible with iOS 6 and above.

We’re trying to get hold of some screenshots of the app in action, and as soon as we do, we’ll bring them to you.

UPDATE: Here are some screenshots of BBM on Android, courtesy of Restrictive in the CrackBerry forums. We’re on the hunt for me, and we’ll continue to update this post as we find them. 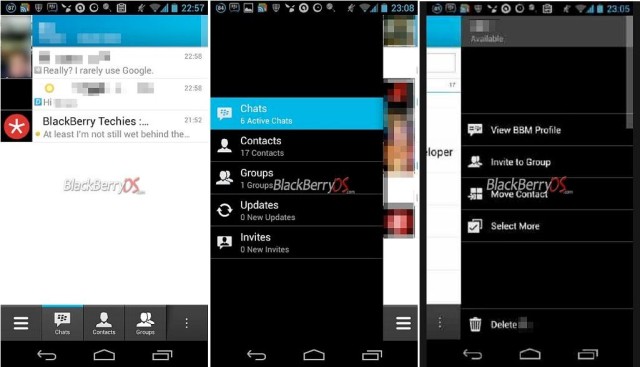