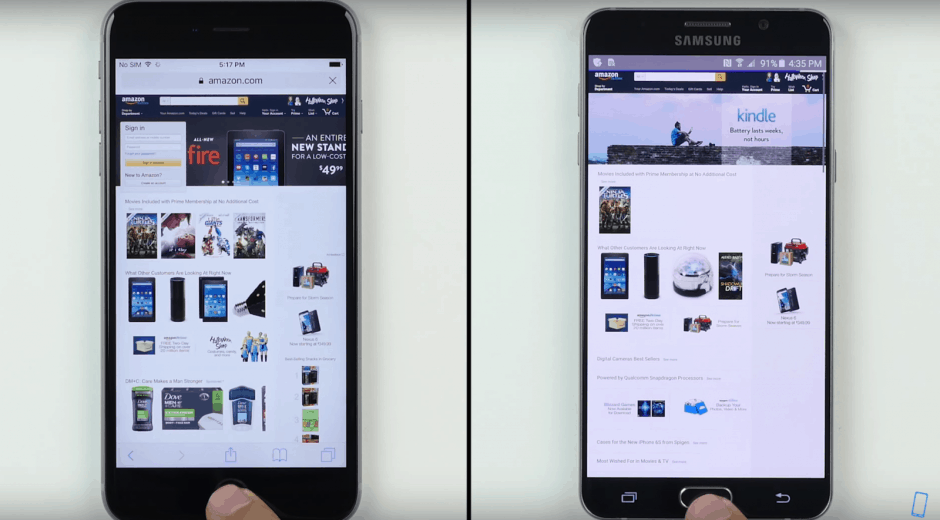 On your marks, get set, go! Photo: PhoneBuff

When it comes to specifications, Apple’s latest iPhones look like they’re lagging far behind their Android-powered rivals. But thanks to super-efficient software, they’re not as slow and as outdated as they might look on paper.

This is demonstrated in the real-world speed test below, in which the iPhone 6s Plus somehow batters a Galaxy Note 5.

Before you watch the video, let’s just remind ourselves of the specifications in these flagship phablets.

The Galaxy Note 5 is powered by Samsung’s octa-core Exynos 7420 processor and 4GB of RAM. The iPhone 6s Plus, on the other hand, is powered by a dual-core Apple A9 chip and only 2GB of RAM. The Note 5 should be a clear winner here, then, but it’s not.

In a three-minute test carried out by PhoneBuff, which tests everyday things like app loading speeds and multitasking, the iPhone 6s Plus is a clear winner.

The most surprising part of this test is the multitasking element, which sees both devices quickly switching between apps. The Note 5 should win this easily with 4GB of RAM, but it still has to reload every app that’s reopened, while they’re stored in memory and load instantly on the 6s Plus.

Given that the Note 5 is the fastest Android-powered smartphone available right now, recently beating out the LG G4 and OnePlus 2 in another PhoneBuff test, it’s safe to say the 6s Plus is the fastest mobile available overall.

It should be noted that the Note 5 is no slouch. Without the 6s Plus alongside it, the device looks plenty fast enough, and I ran into no performance issues while I was using the device for my review. I did mention, however, that Samsung’s TouchWiz software can lead to some stutters.