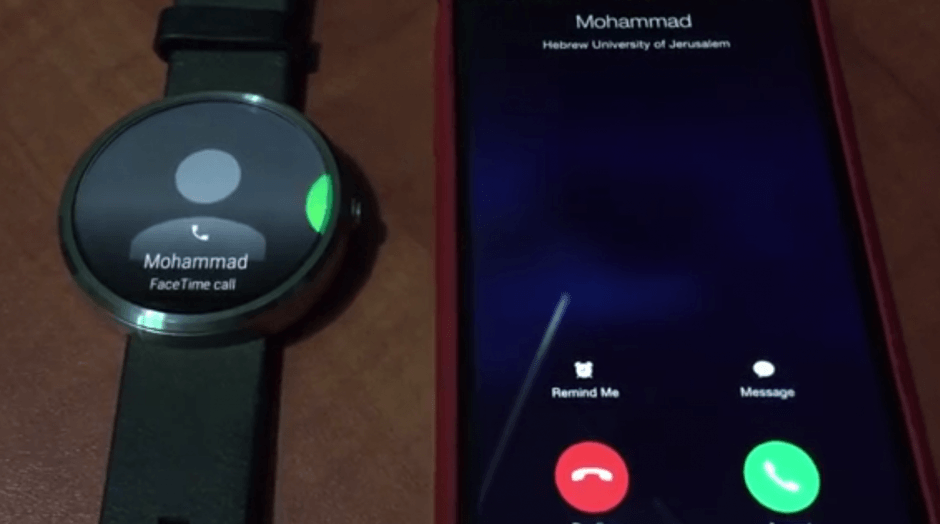 Moto 360 and iPhone: a strange but beautiful match. Screenshot: Cult of Android

Google is said to be working on bringing Android Wear support to iPhone, but in the meantime, it’s up to third-party developers to marry the two.

One hack has already made it possible to display iOS notifications on Wear watches, and now it has been improved to take calls from your iPhone, too.

Developed by Mohammad Abu-Gabreyyeh, creator of the popular Xposed framework for Android, the hack uses a simple APK installed on an Wear watch — in this case a Moto 360 — that allows it to accept notifications from an iPhone.

The hack uses the same Apple Notification Center Service (ANCS) API as devices like the Pebble, so it doesn’t have quite as much freedom as Wear normally does with Android — especially not at this early stage. But it’s a start.

If Google’s rumored Android Wear app for iPhone never materializes, iPhone users may rely on hacks like this to use the Moto 360, the LG G Watch R, and other Wear devices as cheaper alternatives to Apple Watch.

While it may be extremely limited for now, it’s possible Wear may soon be able to do as much as the Pebble can when connected to an iPhone — like controlling your music and tracking your steps. That’s assuming Abu-Gabreyyeh doesn’t give up, of course.

Unfortunately, Abu-Gabreyyeh isn’t making his APK available to the public just yet, so we’ll have to make do with these short demonstration videos for now.