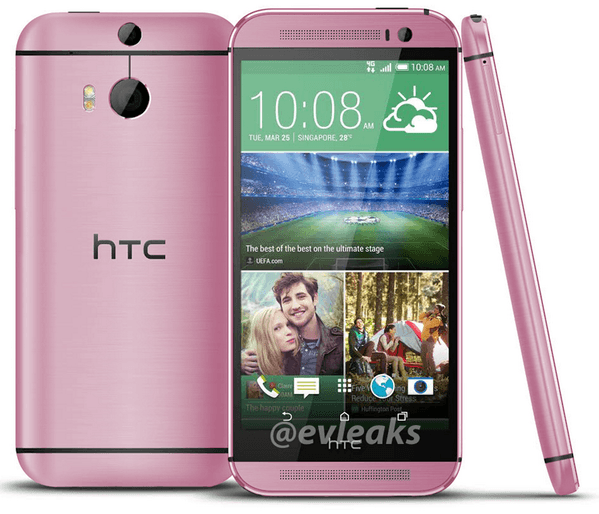 The HTC One M8 is by far the prettiest Android-powered smartphone money can buy. Its sleek aluminum form factor makes its plastic-packing rivals look even tackier, and it’s one of the few phones I can think of that actually feels like it is worth its premium price tag. The only handset that comes close in terms of design is its predecessor, the original One (M7).

So, how do you make it even prettier? Paint it pink, of course. And that’s exactly what HTC plans to do with its latest flagship.

This leaked press image, which was published on Twitter by the ever-reliable @Evleaks, reveals a new One M8 that comes in pink with black accents. It’s still made of aluminum, as far as we can tell — but it’s anodized with a hot pink finish that’s sure to be a hit with teenage girls.

The handset’s internal specifications will almost certainly remain the same, so in addition to a stunning 5-inch 1080p display, it will offer the latest Snapdragon 801 processor, BoomSound speakers, a microSD card slot, and HTC’s new Duo Camera sensors.

This leak comes just days after the One M8 mini — believed to be called the “HTC One mini 2” — was revealed by @Evleaks ahead of its official unveiling. The midrange devices looks almost identical to its big brother, but it is expected to pack modest specifications and only one rear-facing camera.

It’s unclear when the pink M8 will be available, but if HTC is already making up the press images, it can’t be too far away.