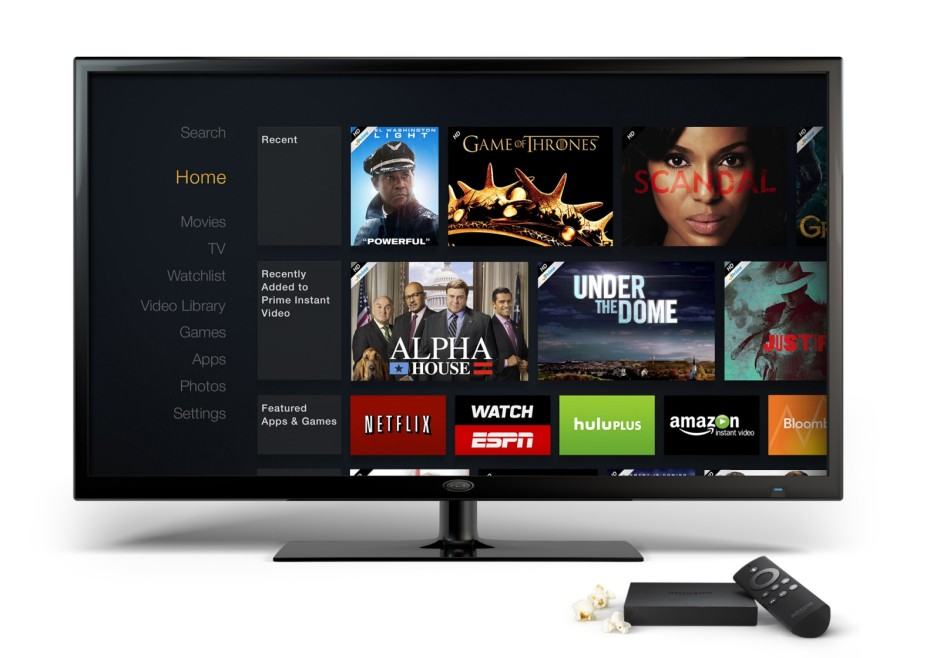 At an event in New York City this morning, Amazon finally announced FireTV, its long-awaited Apple TV competitor. It’s three times faster than its competitors, with a “best in class” quad-core processor and a dedicated GPU, and it runs the latest Android games.

FireTV looks very similar to the Apple TV — it’s a tiny little black box that fits in the palm of your hand — and it supports a lot of the same services, including Netflix, Pandora, Hulu Plus, and of course, Amazon Prime.

But its main advantage is its ability to run Android apps, and Amazon has baked in some impressive specifications to ensure you get good performance.

In addition to its quad-core processor and dedicated GPU, the FireTV boasts 2GB of RAM, MiMo dual-band Wi-Fi, and Bluetooth connectivity. Its remote takes advantage of the latter, so you don’t have to worry about blocking any infrared sensors.

The remote also has a built-in microphone that lets users search for movies, TV shows and more using their voice. Amazon demoed this on stage by saying “John Malkovich,” and FireTV returned everything Malkovich has ever been in incredibly quickly.

FireTV supports 1080p content streaming and Dolby digital sound, and connectivity options include HDMI, Ethernet, USB, and an optical out. There’s also an accompanying game controller — which we’ve seen before — which will cost $40.

With this controller, the FireTV places a big focus on gaming. Amazon debuted a number of titles on stage at the event – including Minecraft — and they all ran very well. Graphics and performance was likened to that you’d expect from a high-end Android smartphone.

FireTV runs regular Android games, so there is already a massive catalog to choose from — thousands of which are free to play. Amazon Game Studios is also developing its own titles for the device, including Sev Zero, a shooter that features tower defense elements.

What’s more, FireTV supports multitasking, so you can play games while you’re listening to music from Pandora at the same time.

While existing Android-powered game consoles like the Ouya haven’t quite taken off like many were expecting, gaming could be the edge that allows FireTV to beat rivals like Roku and Chromecast.

And it’s going to need that edge. The home entertainment market is incredibly saturated with devices like the FireTV already, and lots of manufacturers have learned the hard way that it isn’t easy to compete. Google’s had some success with Chromecast recently, but its Google TV platform is all but dead now — as are the devices that supported it.

FireTV is priced at $99 — the same as the Apple TV and the latest Roku — and it’s available to order today from Amazon.com.