LG has begun issuing invites for a G Flex launch event in Hong Kong on December 3, signaling the company’s intentions to start selling the device internationally. The G Flex first went on sale in South Korea last month, but we’ve been expecting it to expand its reach before the holiday season.

The invitation follows an early November report that claimed the G Flex would be making its way to Europe — specifically Orange in France — next month. It is also expected to come to the U.S. on AT&T, Sprint, and T-Mobile, but not until early 2014. 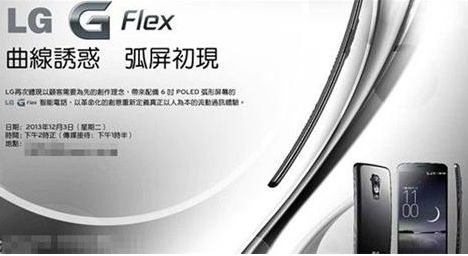 The G Flex is LG’s first smartphone with a curved glass display, which actually flexes under pressure. The device also boasts other innovated features, such as a self-healing back panel, and high-end specifications that include a 6-inch 720p display, a quad-core Snapdragon 800 processor, 2GB of RAM, and a 13-megapixel rear-facing camera.

The G Flex sells for 999,000 won in South Korea, which is roughly $940 in the United States and €695 in Europe. Those prices are yet to be confirmed by LG, but it certainly seems like the G Flex will be a pricey device.