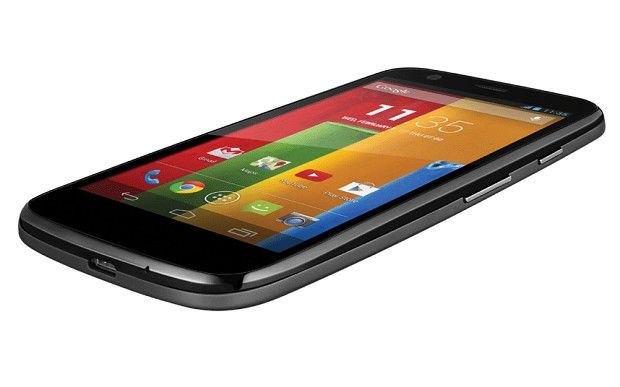 Motorola has today announced the midrange Moto G at an event in São Paulo, Brazil. The device looks a lot like its sibling, the Moto X, but it has a slightly smaller display and lesser specifications that make for a significantly cheaper price tag.

Thanks to a number of leaks that surfaced earlier this week, we already knew what the Moto G would be packing — but now it has all been confirmed by Motorola. The handset has a 4.5-inch 720p display with a 1280×720 resolution that provides 329 pixels-per-inch, and it’s powered by a 1.2GHz quad-core Snapdragon 400 processor.

There’s also 1GB of RAM, 8GB or 16GB of internal storage, a 5-megapixel rear-facing camera, and a 1.3-megapixel front-facing camera. The 2,070mAh battery will keep the Moto G running all day, Motorola says, but the non-removable back panel means that battery isn’t swappable. There’s no microSD card slot or LTE connectivity, either.

Android 4.4 KitKat update will be available soon after launch.

The Moto G will run Android 4.3 Jelly Bean out of the box, but Motorola promises that the Android 4.4 KitKat update will be available soon after launch. Sadly, it won’t include the staple features that were made famous by the Moto X, like Active Notifications, Touchless Control, and Quick Capture.

The Moto G is out today in Brazil and parts of Europe, while the rest of Europe, Latin America, and Canada will get the device in early January.