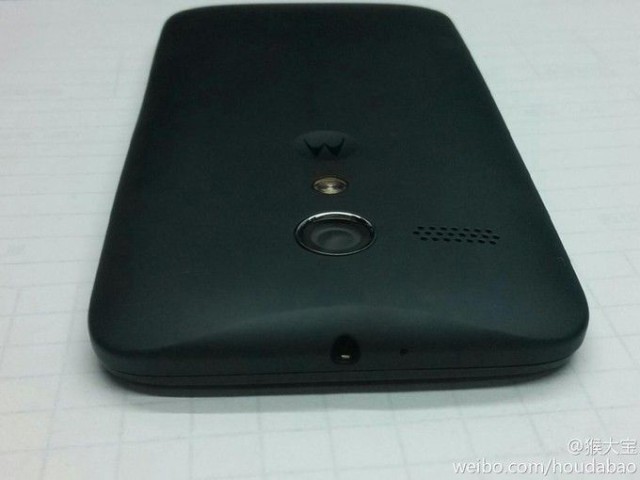 The Moto X is one of the worst-kept smartphone secrets of 2013. It hasn’t been announced yet, but we already know exactly what it’s going to look like. Having seen lots of pictures of its front in recent weeks, the latest leaked photograph shows off its back.

The image was uploaded to Weibo, a Chinese social networking site much like Twitter, and it’s thought to be the first leaked image of a fully assembled Moto X. As you can see, it’s a black handset — though the handset is expected to be customizable — with a subtle Motorola logo in the center of its back.

The LED flash sits just above that, and the camera above that. The speaker grille is on the right (of left, depending on which way you look at it) of the camera, and the headphone jack sits in the center of the device, on its top edge.

The Moto X doesn’t look particularly special in this picture, and according to the rumors, it won’t be. We’re expecting a mid-range device much like the Nexus 4. But it is said to be customizable, and you’ll be able to choose the color of the handset’s back panel and trim yourself.

According to a leaked Verizon roadmap, the Moto X will go on sale in late August.