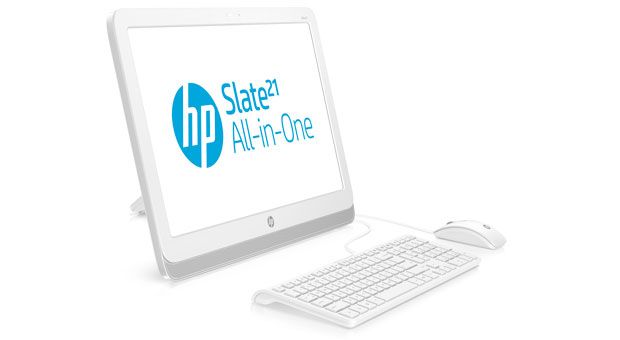 At an event in Beijing today, HP unveiled the Slate 21, a new all-in-one desktop with a 21.5-inch display, powered by the latest NVIDIA Tegra 4 processor. But unlike most all-in-one desktops, this one isn’t powered by a desktop operating system. Instead, it runs Android 4.2.2 Jelly Bean.

The Slate 21’s built-in kickstand allows you to stand it on a desk, then connect a mouse and keyboard. And because it has a touchscreen, you can also take it away and use it as a traditional, albeit very large, tablet.

The Slate 21 is one of an increasing number of tablet-desktop hybrids that aim to give consumers the benefit of both products in one. Unlike the Samsung ATIV Q that was announced last week, however, the Slate 21 doesn’t have the option of running Windows — it’s Android only.

For casual users, that could be just fine, but for others the Slate 21 may not be the most practical desktop replacement. Nevertheless, it does look pretty neat.

HP hasn’t confirmed pricing or availability yet, so we’ll update you when we hear more.