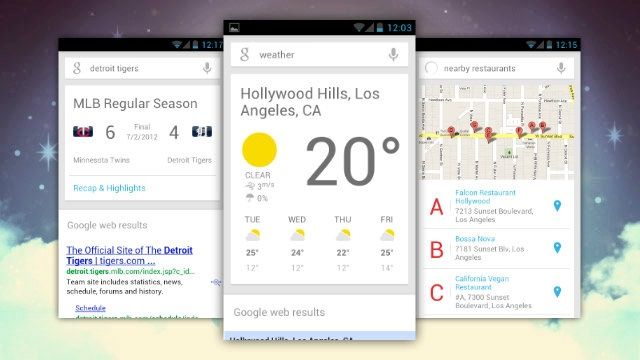 It’s tempting to look at Google’s vast range of products and research projects and conclude that the company has more ideas than vision. (The difference is that ideas tend to be disconnected, whereas vision involves a coherent strategic direction.)

Where is Google going? Does Google even know?

A closer look suggests that Google is, in fact, an increasingly visionary company. And the fate of many Google projects is predictable.

Some are predestined to die eventually in the hellfire of “spring cleaning” (Orkut), many will live on forever as useful, profitable but not centrally strategic products (Gmail) and others form the strategic centerpiece of Google’s longterm future (Google+).

If we’ve learned anything from the truckload of Google Glass details this week, and from prior revelations that I’ll tell you about, Google Now is absolutely strategic and central to the future of Google.

More interestingly, Google Now’s cards metaphor looks likely to become one of the main interfaces for interacting with Google’s many cloud services.

Google Glass runs Android, according to co-founder and CEO Larry Page, who finally answered that burning question this week in an earnings call.

Glass apps, called “Glassware,” are not created like regular Android apps. They’re loaded from the cloud rather than installed on the eyewear itself.

Glass apps interact with the user via Google Now-like cards, which are placed on a timeline. Users can make them persistent by “pinning” them to the UI.

Cards are floating nuggets of information and/or functionality — text, pictures, video or HTML — or “bundles” that can combine these media types. When the user taps to drill down into one of these media-type “bundles,” they get a “sub-timeline.”

Of course, the glass experience will be heavily influenced by the apps created by developers, which are hitherto unknown. However, we can expect intelligent interruptions for communications (contextual information discovery (“pick up your dry cleaning” when you’re near the cleaners) and many others. These may or may not come with other information — for example, the communication might alert you when there’s a new message from your friend, but it could show you the whole thread. The cleaners notification might be accompanied by a scan of the receipt.

In any event, Google Glass “stuff” will all be presented in the cards metaphor.

But I suspect that no matter how many cool apps are written for glass, how many hangouts you do while dropping from dirigibles over San Francisco and how many YouTube videos you watch while pretending to talk to your spouse, the biggest use for Glass by far will be Google Now itself.

Glass already has built-in commands to interact with Google Now. And with Glass, Google Now becomes a whole new thing. The reason is that when Glass talks to you via a phone or tablet, it has to be on and you have to be looking at it for Now’s suggestions and input to affect you. But with Glass, it can be always on and you can always be looking at it. Getting Google Now interruptions from Glass will feel similar to a thought or an epiphany.

Google Now is the conspicuous “killer app” for Glass.

And Google Now will serve up its relevant, contextual nuggets of data in cards, just like everything else on Glass. You can expect a constant stream of gentle information that gets smarter the more you use it.

Beyond Glass, rumors and reports suggest that Google now is coming to both Chrome and the Chrome OS, and possible iOS. Now’s cards metaphor is going to spread like a virus.

Remember Android@Home? Google talked about its plans for   an Android-based home automation platform two years ago, and it has yet to materialize in any meaningful way. Google I/O is coming up next month, and I expect we’re going to be hearing more about Android@Home.

What’s interesting to me is that Google Now’s hidden home automation features are to be served up on cards like any other Google Now content or functionality.

Other reports indicate that Google is working on a smartwatch — an Android-based wristwatch that may or may not function in tandem with a smartphone.

Of course, Glass-like cards will be ideal for a small interface like a wristwatch.

And although the cards metaphor is something currently associated with Google Now, if you think about it Google+ posts are pretty much evolving into cards, too.

Social Cards? You’re Soaking In It

Of course, like cards in Google Glass, Google+ posts can be text, pictures and videos, pretty much like other social networks or blogs. However, recently Google added the ability to create “interactive posts,” meaning posts with buttons that enable various actions to be performed in the cloud.

Google published a list of 100 actions that can be performed from inside Google+ posts, from donating to a case to registering for a service to voting in a poll.

Don’t look now, folks, but Google+ post are cards. And soon, I suspect, we’ll see those Google+ cards being shuffled in with Google Now and other cards.

Eventually, I think we’ll see cards that can be multi-purposed across the web, in Android, on Glass, on the Google smartwatch and in Google+ and beyond.

When that happens, the whole Internet will function like Google Now.

Some of those cards will be functional. Some will be informational. And others will be social. And best of all, some will be all of the above.