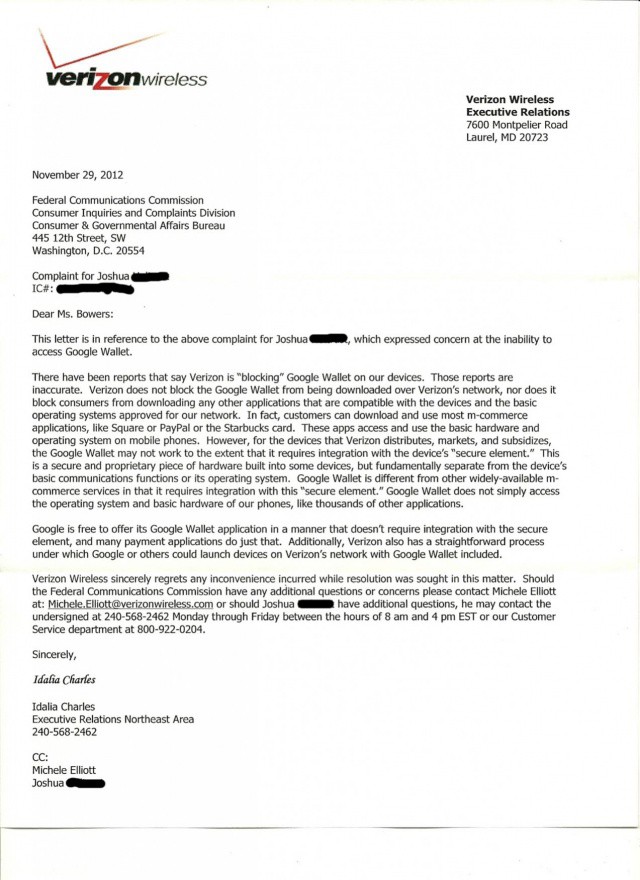 Verizon has responded to an FCC complaint about their shameless blocking of the Google Wallet application, and as expected, has placed the blame on Google. Not only did they place the blame on Google, but they actually denied blocking the app in the first place. It’s actually quite comical to read their response:

Verizon does not block the Google Wallet from being downloaded over Verizon’s network, nor does it block consumers from downloading any other applications that are compatible with the devices and the basic operating systems approved for our network

Verizon then goes on to blame Google’s secure element as being the reason Google Wallet isn’t available on Verizon. They’re basically using semantics to get around the fact that Verizon users CAN NOT download the Google Wallet app on their network via the Play store.

Google is free to offer its Google Wallet application in a manner that doesn’t require integration with the secure element, and many payment application do just that. Additionally, Verizon also has a straightforward process under which Google or others could launch (they say could launch because they can’t launch thanks to Verizon blocking them from doing so — I added this snarky remark) devices on Verizon’s network with Google Wallet included.

Even Verizon’s BS flies at the speed of LTE. Verizon is obviously preventing its customers from downloading Google Wallet from the Play store and anyone can see that by simply going to the Play store from their Verizon device and trying to download Google Wallet.

I don’t expect the FCC to do squat about it unless enough people start filing complaints and making a stink. However, it’s these tactics that Verizon has been partaking in that has convinced me to leave once my contract is up (despite them having the best coverage).

And I don’t want to hear the argument that I can download the Google Wallet app from a third party source and side-load it. I don’t care if I can download Google Wallet from XDA, I shouldn’t have to. I should be able to download it from the Play store or from Google directly (which is a whole other rant I have saved up).

So, who do you blame: Verizon or Google?