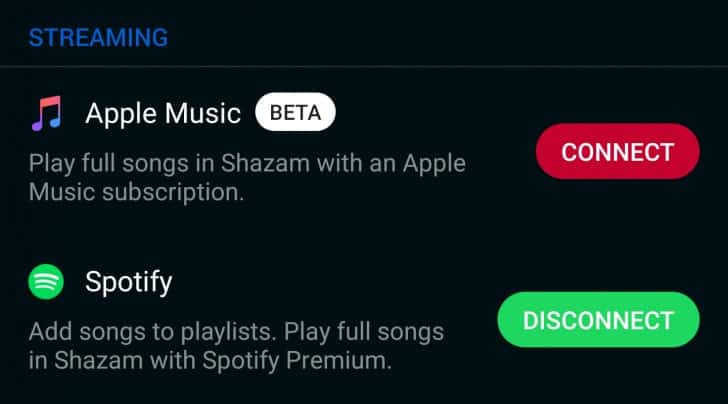 Users have the ability to identify songs and enjoy full versions of them using their Apple Music subscription. The feature comes with a beta tag for now, but works just as you would expect.

Shazam on Android has long offered Spotify integration, giving Premium subscribers the ability to not only play full tracks, but also to add them to their Spotify playlists.

It seemed strange the same functionality wasn’t available to Apple Music users, given that Shazam has been an Apple company for a long time now. However, we’re finally starting to see it.

This week’s update to Shazam for Android brings Apple Music integration for the first time. It’s not quite as full-featured as Spotify integration (you can’t add tracks to playlists yet), but it’s a start.

The change gives you the ability to play full tracks using your Apple Music subscription. You can connect your account by tapping the settings button within the Library section of the Shazam app.

Note that Apple Music must be installed on your Android device for this to work, and you must have a valid Apple Music subscription (a free trial will do) or you’ll see an error.

You might be wondering whether Apple Music integration is there to replace Spotify inside Shazam. That’s not the case. Both options are available, and it’s unlikely that is going to change.