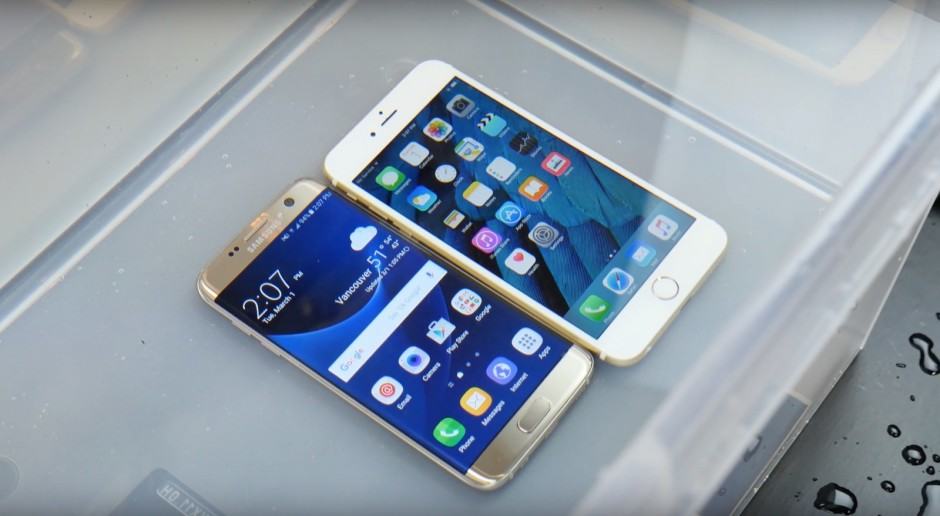 Samsung’s IP68 rating keeps it usable and safe underwater, but not so much when it gets dropped. Photo: EverythingApplePro/YouTube

In the endless battle for supremacy between Apple and Samsung, the Korean company has leaped ahead of Cupertino when it comes to water-resistance. But the iPhone 6s Plus still reigns supreme in terms of shatter-resistance.

A YouTuber set the new Samsung Galaxy S7 edge next to an Apple iPhone 6s Plus in a big deep tub of water, then dropped them both from different heights, and the results are pretty predictable (yet still fun to watch).

Apple doesn’t claim that any of its iPhones are waterproof, so this comes as no surprise. About 15 minutes in, the iPhone 6s Plus is wrecked and water damaged. Don’t try and take that one in for a free replacement.

The Galaxy S7 edge, on the other hand, is brilliantly waterproof. Samsung says the phone meets the IPX68 standard, which means it’s going to stay dry in up to 3 meters of water as well as under water jet pressure.

As intrepid YouTuber EverythingApplePro points out, the Galaxy S7 edge is waterproof from the inside out; when he presses on the smartphone underwater, no bubbles come out. In fact, he’s able to use the phone underwater, which could be a boon to everyone who wants to take photos and video in the ocean or while skiing.

In EverythingApplePro’s set of drop tests, however, the iPhone 6s Plus comes out the clear winner. The Galaxy S7 edge’s backplate starts to shatter when dropped from head height. The iPhone suffers a couple of dents, but remains far more intact, even when dropped from 10 feet or higher.

If your smartphone purchase is based on either waterproof rating or shatter-resistance, you now have a clear direction to go. If you’re looking for a phone you can use in water, Samsung has you covered. If you want one that will take repeated drops and refuse to shatter, the iPhone is the one to get.