Google I/O is going to be good this year. Photo: Google

If you weren’t already excited for Google I/O later this month, the conference schedule Google published today should get you in the mood.

In addition to all but confirming an Android M unveiling, it also promises new wearable’s from Google’s ATAP (Advanced Technology and Projects) team that “will blow your socks off.”

Google drops the teaser into a session description for “Badass and beautiful. Tech and human. Love and work. ATAP,” which takes place at 9 a.m. on May 29. It’s a one hour and 15-minute event, but it seems ATAP has a lot to show off in that time.

The session description mentions Project Ara, Google’s modular smartphone; a new Spotlight Story filmed in 360 degrees with 3D sound, and “wearables that we hope will blow your socks off.”

“We mean this more literally than you might think,” Google adds. “Our goal: break the tension between the ever-shrinking screen sizes necessary to make electronics wearable and our ability to have rich interactions with them. Why can’t you have both?” 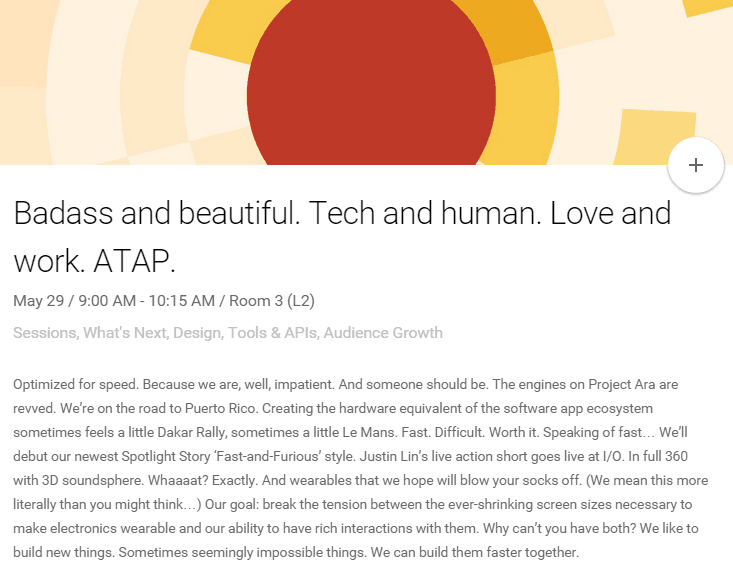 Yeah… we’re pretty confused, too. Wearables that will literally blow your socks off? With touchscreens big enough to have rich interactions with? Does that mean some kind of smart sneaker with a smartphone strapped to it?

Probably not, but it certainly sounds very exciting. We’ll find out more when Google I/O kicks off on May 28. And don’t worry if you don’t have tickets to the event, because this particular session and many more will be live-streamed, so you’ll be able to watch along at home.