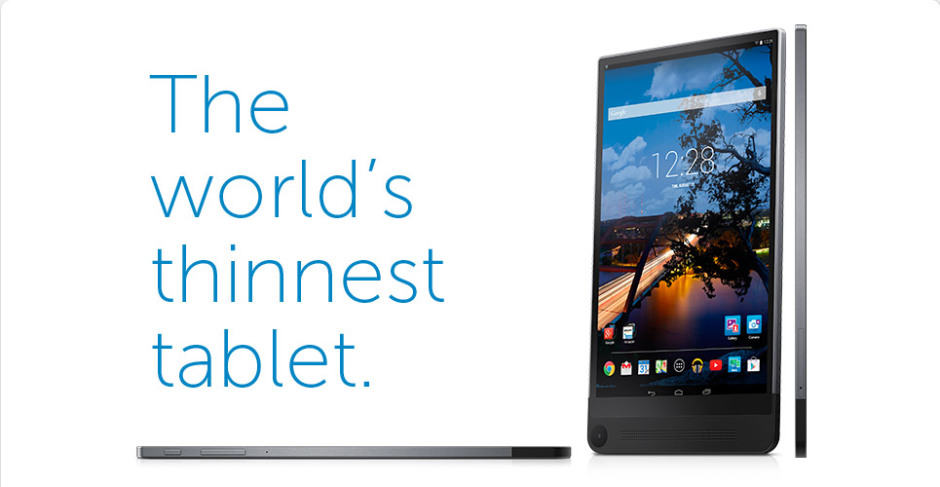 Dell doesn’t usually impress us with its Android-powered offerings, but its new Venue 8 7840 tablet could be far more impressive than the onslaught of new slates we see at CES this week. It’s powered by a speedy Intel processor, has four cameras, and takes the title of the world’s thinnest tablet to date, measuring just 6mm thick.

Yes, the Venue 8 is even thinner than Apple’s new iPad Air 2 — but only by 0.1mm. Still, that’s pretty darn impressive for a company whose tablets have been pretty disappointing in the past. Inside that slender form factor, Dell has packed in an Intel Atom Z3580 quad-core processor clocked at 2.3GHz with PowerVR G6430, and 2GB of RAM.

The Venue 8 also has 16GB of internal storage, a microSD card slot, and an 8.4-inch OLED display with a 2560×1600 resolution. It’s powered by Android 4.4.4 KitKat, and it provides a mostly stock Android experience save for a few of Dell’s own apps and tweaks here and there.

Aside from its design, the Venue 8’s most interesting feature is its camera setup. There’s a 2-megapixel shooter on its front, an 8-megapixel shooter on its back, and another two rear-facing 720p sensors that measure depth information using Intel’s RealSense technology. These provide the same kind of effects you get from HTC’s Duo Camera feature on the One M8.

If you like the look of the Venue 8, you can get your own starting today at Best Buy, with prices starting at $399.99.