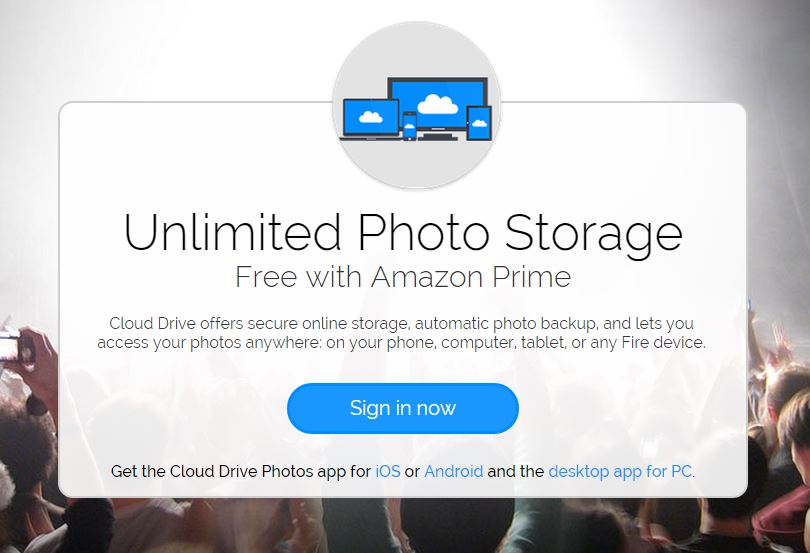 Amazon Prime has always been a pretty incredible deal, and it just keeps getting better. As of today, Amazon is giving all subscribers unlimited photo storage at no extra cost with a new cloud-based backup service called Prime Photos.

Prime Photos is a lot like Dropbox, Flickr, and other photo backup services. It takes all of your photos and stores them in the cloud, allowing you to save local storage, access them at anytime and from anywhere, and ensuring that you never lose a single snap. But unlike the vast majority of its rivals, it’s complete free — if you’re a Prime subscriber.

Amazon has already launched Prime Photos companion apps for Android and iOS, which will automatically upload the photos you take on your smartphone or tablet to the cloud. You can also upload, download, and view your images from your computer via a web browser.

Everything you upload is preserved in its original resolution, and even RAW files taken with your DSLR are supported.

Prime Photos is actually an extension of Amazon’s existing Cloud Drive service, so if you’re already using that, you don’t need to make any changes to your workflow. The only difference now is that photos will no longer eat into your storage cap, so even if you’re using the free 5GB plan, you can upload as many as you like without paying a penny more.

Amazon Prime is priced at $99 a year, for which you get free two-day shipping; Amazon’s own Instant Video, Music, Pantry, and Early Access services; and the ability to share and read Kindle books for free.

Even if you’re already tied to Flickr or Google+ or another photo backup service, you should also upload all of your images to Prime Photos if you’re a Prime subscriber. It’s not going to cost you a thing, and you simply cannot have too many backups.