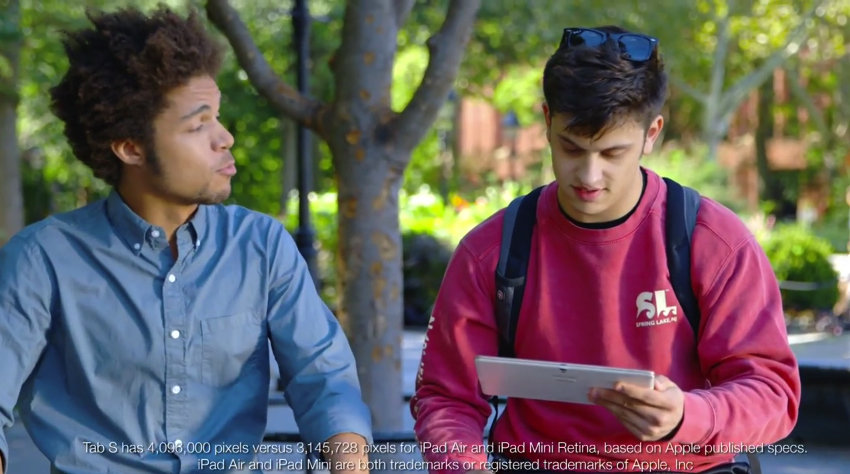 Sometimes you wonder whether Samsung churns out so many products simply to take more swipes at Apple.

Samsung can’t go for long without feeling the need to lash out at Apple with a new ad. This time it’s the recently-launched Galaxy Tab S tablet, which is the center of a “Hands-On” commercial, showing a Samsung spokesman going around New York City, letting “random” members of the public pick between the new Galaxy Tab S and iPad Air.

And — wouldn’t you know it (this being a Samsung commercial and all) — the comments come down heavily in favor of Samsung!

Praise for the Tab S include the fact that it’s “really light,” that it “takes up, like, no space” and that its “resolution [is] awesome.” Another would-be customer notes that “Samsung makes the best screens in the world,” while yet another says the device just plain “looks better” than Cupertino’s rival offering.

The presenter additionally claims the device has “almost 1 million more pixels,” while a title card observes that the Tab S has 4,096,000 pixels versus the iPad Air’s advertized 3,145,728 pixels.

The ad ends with with a message written in an Apple-style typeface saying that the Tab S is “Thinner. Brighter. Lighter.”

It also overheats a whole lot more than the iPad. But Samsung doesn’t want to advertize that for obvious reasons.

The ad can be watched at this link.