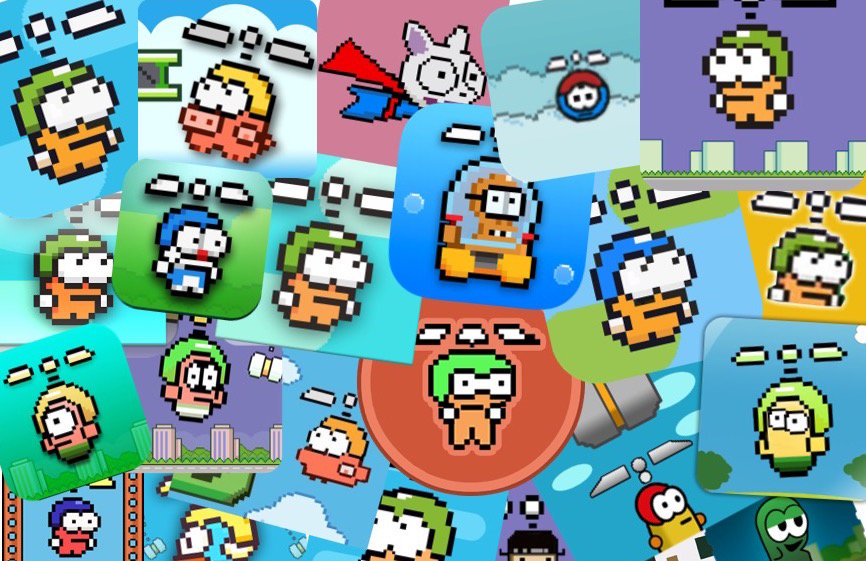 Swing Copters, the latest game from Flappy Bird creator .GEARS Studios, could be one of the most difficult games you’ll ever play on a smartphone — but the frustration begins long before you actually start playing the game. Thanks to hundreds of clones that now litter Google Play, finding the original release is where the challenge really begins.

The biggest problem with an uncontrolled Google Play Store isn’t malware, it’s the unbearable and ever-increasing number of clones. They make original releases harder to find and they hurt developers, but perhaps worst of all, they con unsuspecting customers into handing over their cash for what they believe is an original app.

Every time an app gains even the slightest bit of success, a whole bunch of “developers” are ready to clone it, and there’s greater example of that than Swing Copters.

No matter how good it turned out to be, a new title from the maker of Flappy Bird was always destined for a wealth of attention. With that in mind, unscrupulous app makers will have been patiently awaiting its release just so that they could churn out their own clones and cash in on the popularity.

But I’m not sure anyone would have correctly predicted just how many clones Swing Copters would generate. 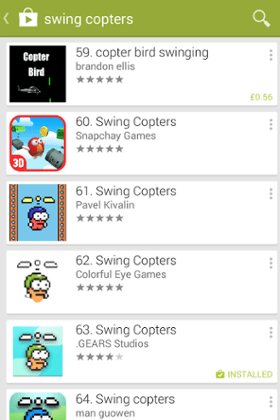 Search Swing Copters in Google Play and you’ll find literally hundreds of ripoffs, many of which use almost identical app icons. At the time of writing this piece, the original Swing Copters game is the 63rd result in search rankings, meaning you have to scroll past another 62 apps just to find it.

If you weren’t already aware of the clone problem, you’d probably scroll past the first 7 or 8 and then just assume it wasn’t available to download yet. Or you may have been fooled into thinking one of those clones is the real thing and then downloaded a game you weren’t expecting.

“What the heck? Flappy Bird is great and I still play it. This game is utter crap,” writes Justin Ramsey in a review of one clone.

The Guardian reports that the majority of the ripoffs have bad ratings and reviews, most of which complain about bugs and disruptive advertising. That’s to be expected from an app that’s there only to generate some quick cash off the back of a popular name.

To make sure you get the real Swing Copters game, follow the Google Play link below.