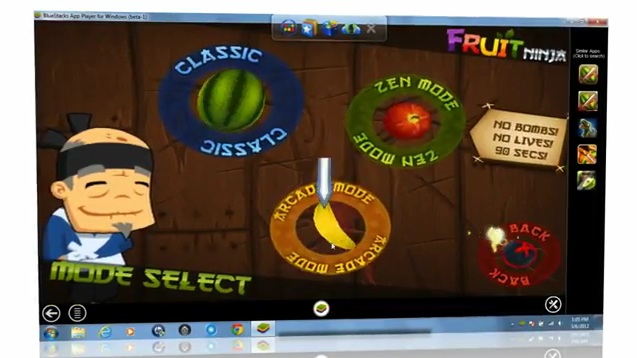 After much testing and a 3-month Alpha run, BlueStacks has announced the availability of the beta-1 version of their App Player for PC. In case you’re unfamiliar with BlueStacks, it’s software that enables Android apps to run in windowed or fullscreen mode on a Windows PC. Their new patent-pending Layercake technology allows these apps to run seamlessly on x86-based PCs and leverages the advanced graphics capabilities of AMD APU and GPU platforms. Simply put: you can run your Android apps on your PC.

While there will be no need to run certain Android apps on your PC, as the fully functional web apps are a much better solution, having the ability to play your Android games (which cost less than the web versions) on your PC is fun and sometimes more enjoyable thanks to the larger screen. To download the BlueStacks App Player For PC you’ll have to visit their site (which seems to be down at the moment). There’s also an accompanying BlueStacks Cloud Connect app on the Google Play Store which allows you to “Push” apps from your phone onto your PC easily and remotely.

For more information check out the full press release below:

CAMPBELL, Calif. – March 26, 2012 – BlueStacks announced the availability of the beta-1 version of their App Player for PC today. The software supports Windows XP, Vista and Windows 7, and enables Android apps to run in windowed or fullscreen mode on PC.

The beta-1 version incorporates the company’s patent-pending LayercakeTM technology. LayerCakeTM enables Android apps to run seamlessly on x86-based PCs. This includes apps written for the ARM processor like Angry Birds Space and Fruit Ninja, as well as apps that use hardware graphics acceleration. These latter capabilities were not part of last year’s alpha version. Apps designed for high-end tablets that use graphics-intensive engines such as Unity can also run on the new platform.

“LayerCake is a disruptive technology that enables PC manufacturers to bring the best of the Android ecosystem to their customers. It also leverages the advanced graphics capabilities of AMD APU and GPU platforms,” said Manju Hegde, corporate vice president, Content, Applications and Solutions at AMD (NYSE: AMD). We are excited to work with BlueStacks to make the emerging Android mobile apps market part of the broader computing arena, especially given that the beta-1 version has been localized for 10 different countries.”

The alpha test of BlueStacks ran from October through December of last year, and included a more limited app selection. In those three months, it attracted over a million users in more than 100 countries such as the US, Korea, Brazil, Germany and China. Over 4.5 Million apps were opened. Especially popular were apps like Kakao Talk in Korea, Wordfeud in Germany and WhatsApp in the US. “You know, first there was Angry Birds on Chrome which was a big deal, then recently Steve Ballmer stood up at CES and announced that Cut the Rope had been ported to IE9 – with BlueStacks, it’s 450,000 apps coming to Windows at once,” said BlueStacks CEO, Rosen Sharma.

The developers behind top apps like Fruit Ninja, SliceIt!, Barnes & Noble’s Nook, Townsmen, Evernote, Defender and StumbleUpon have partnered with BlueStacks to have their apps pre-loaded in the beta-1 version. “A Billion PCs is a huge potential market for any developer. There is the potential to make good money from the additional app discovery and usage,” said Markus Kassulke, CEO of popular developer HandyGames. “The best part is, we don’t have to do any work. Our apps run without any modifications or porting.”

BlueStacks is a software company that enables Android apps to run on PCs, Ultrabooks and tablets. BlueStacks is privately held and headquartered in Silicon Valley with global offices in India, Taiwan and Japan. The company launched in 2009 and is privately funded. Investors include Andreessen-Horowitz, Radar Partners, Ignition Partners, Helion Ventures and chipmaker AMD. The company has raised 14 million in funding so far. For more information visit BlueStacks.com, or join their over 200,000 Facebook fans at http://Facebook.com/bluestacksinc. Follow along on Twitter at @BlueStacksinc