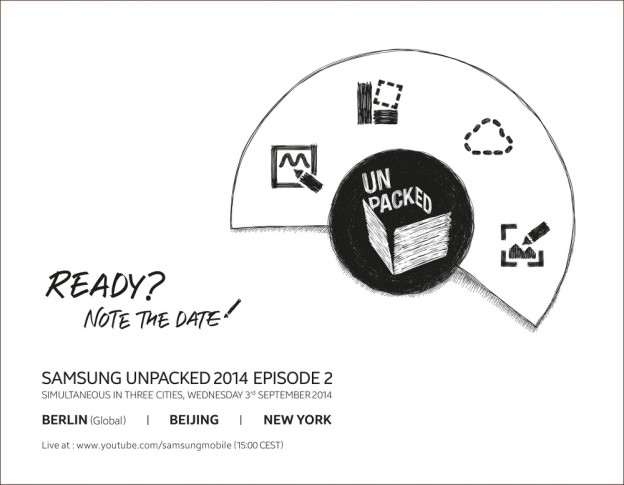 Samsung this week confirmed that it will hold a September 3 Unpacked event in Berlin, where it is expected that we’ll see the official unveiling of the Galaxy Note 4. But just in case you had any doubts about the handset’s arrival, the South Korean company today sent out new invitations that all but confirm it.

“Note the date!” the invites read — alongside a sketch of the Galaxy Note’s Air Command feature, which pops up to provide easy access to different functions when the stylus is removed from the device. The only way Samsung could be more transparent about what’s coming is if the Galaxy Note 4 itself was pictured on the invitation.

The Air Command sketch does look a little different, and likely represents an updated version that will come with the new Note. The S Finder function it currently offers has been replaced with what appears to be some kind of manual selection tool, while the he Action Memo, Scrap Booker, and Screen Write shortcuts are still present.

Samsung doesn’t really need to be too secretive about about what we’ll see at the event at this point; we already knew what to expect from it. But we still have confirmation of the handset’s design and specifications to look forward. Rumor has it Samsung also has other, potentially more exciting devices up its sleeve.

Sources have claimed that Gear VR, Samsung new virtual reality headset, will launch alongside the Galaxy Note 4 in an effort to get a head start over rivals like the Oculus Rift and Sony’s upcoming Project Morpheus. There have also been whispers about a possible Google Glass competitor called Gear Glass.