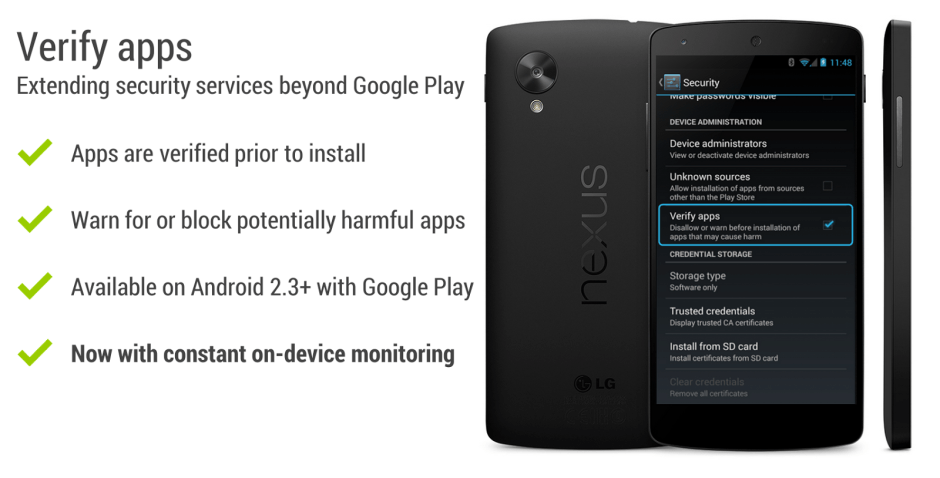 Google has announced that Android will soon run continual security checks on your devices to keep them free from malware and other malicious code. The popular platform already has a “Verify Apps” feature that scans APK files and ensures they are safe before they’re installed, but with continual checks, Android becomes even safer.

The freedom Google’s “open” approach provides with Android can sometimes come at a cost. Having the ability to install APK files manually is often very useful, but if you happen to download a bad file filled with malicious code, you could be in trouble.

Google has already addressed this problem with the Verify Apps feature, which looks for harmful files in APK packages before they’re installed, then notifies the user that there’s a problem. But the search giant is now building on that and stepping up Android security even further by providing continual checks.

The new enhancement, which is rolling out to Android users now, will run in the background and ensure all the apps you’ve installed are completely safe at all times. If it detects any threats, it will inform you.

“Because potentially harmful applications are very rare, most people will never see a warning or any other indication that they have this additional layer of protection,” Google explained on its blog. “But we do expect a small number of people to see warnings (which look similar to the existing Verify apps warnings) as a result of this new capability.”

Google says that Verify Apps has been used more than 4 billion times since it was introduced to Android last year, and in that time only 0.18% of APK files that have been scanned were found to be harmful. This proves that Android is nowhere near as insecure as some reports will have you believe.

However, Google notes that even though the risk is minimal, it wants to ensure our Android devices are as safe as they can be.