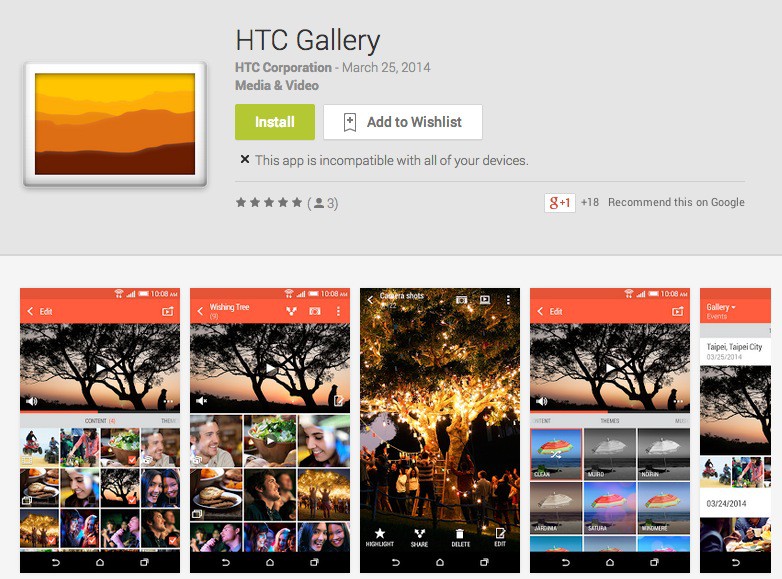 One of HTC’s new Sense 6 apps, which were released via Google Play on Monday evening, has confirmed the existence of an “HTC One (M8) Google Play Edition.” Like its predecessor, the new HTC One will available with a stock Android ROM free from HTC’s Sense 6 user interface.

We first heard about this device on March 10 when the ever-reliable @Evleaks revealed it on Twitter, and now it’s all but confirmed thanks to the new HTC Gallery app.

Here’s the app description, with the important bit highlighted in bold:

The HTC Gallery provides you with a range of fast and easy ways to locate your photos. With Image Match, simply choose a photo with the object or person you want to find and it will locate similar images for you. Timeline View allows you to locate images by day, month or year. And POI Location searches photos that have been taken at a particular place. Now it’s fast and easy to find all the photos you need to. Support for HTC One(M8) Google Play Edition is limited to HTC Photo Edit.

HTC will announce the new HTC One later today at events in New York City and London. We’ll cover the whole thing as it unfolds, so be sure to keep an eye on the blog. Hopefully, we’ll get confirmation of the Google Play Edition’s price tag and release date then — but don’t be too surprised if HTC leaves that announcement to Google later on.