BlackBerry’s chance at clawing back smartphone share and mounting any kind of a threat against Android and iOS looks slimmer every time the company announces its sales figures. It seems increasingly likely the Canadian company will eventually have to sell off its smartphone business or turn to Android in an effort to survive.

But despite what you may think, the BlackBerry 10 operating system isn’t a complete write-off. In fact, there are lots things it does incredibly well. Having used it myself for quite a bit over the past 12 months, I’ve compiled a list of five features that I think Google should steal for Android.

Before I get to that list, let me clear some things up. I’m a BlackBerry fan. I adopted a Z10 the day it came out last February, and I’ve owned some form of BlackBerry 10 device ever since. I now have a Z30, and there are a lot of things I like about it.

But I’m also a realist. I know BlackBerry 10 can’t survive on core features alone, and quite frankly, its app catalog is dismal. The support from a lot of big-name developers isn’t there, and although there are many who are working to fill the void, it’s just not good enough.

There’s no Instagram. There’s no Vine. There’s no Netflix. There are no official Google apps. There’s no Spotify. There’s no Rdio… I could go on all day. And I know that you can side-load Android apps — that’s even easier now that BlackBerry 10.2.1 is here — but it’s far from a seamless experience.

With that said, I’m not just another Android “fanboy” hating on BlackBerry because it’s an easy target — but I am an Android user predominantly because BlackBerry 10 just isn’t good enough.

When I’m not using my Z30, however, there are five feature in particular that I miss. 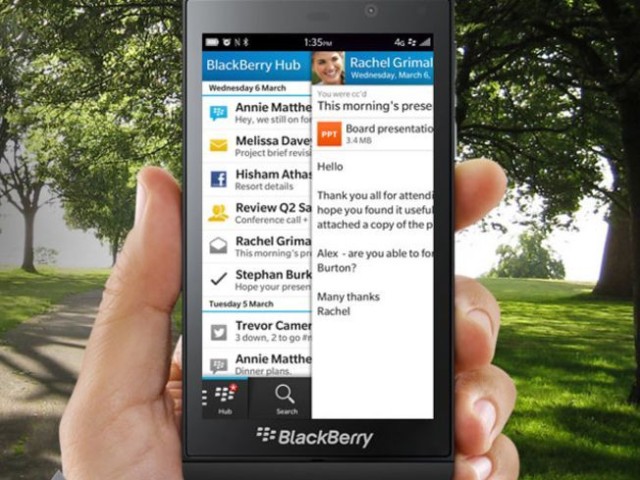 BlackBerry Hub is arguably BB10’s best feature, and I think every smartphone OS should have a Hub of its own. It’s the feature every BB10 user shows off first when they show you their smartphone. Hub is where all the communication happens; it’s a central place where you can access every email, SMS, Facebook and WhatsApp message — and just about everything else you send and receive.

It’s a little bit like a notification center, but a lot better. It’s not just a list of alerts that divert you to other apps; everything happens inside the Hub. So no matter what the notification you receive, you go to the Hub to read it — and to reply to it, comment on it, delete it, etc.

The Hub is easy to access — you simply swipe up from the bottom of the display and then to the right — so everything you want at your fingertips is right there when you need it. And of course, you can filter notifications by app or service if you want to, and there’s an excellent search tool for finding old stuff.

There’s no OS the BlackBerry Hub wouldn’t improve — it’s that good. So good that when I’m not using a BlackBerry 10 device, having to hop between apps to reply to messages through different services feels a bit… antiquated.

If you ask any tech writer who has used BB10 what their opinion is on the keyboard, the vast majority will tell you it’s incredible. It’s the best there is on mobile, and it’s a massive shame that it hasn’t been ported to Android yet. Not only is it incredible accurate, but it has a terrific prediction feature that makes typing emails and text messages super fast.

As you type on the BB10 keyboard, it puts next word suggestions above different keys, and you can perform a short swipe up from the key to insert the whole word. Of course, the more you type, the better the keyboard understands you, and so it becomes more useful and more efficient over time.

In addition to this, the BB10 keyboard is (as far as I know) the only smartphone keyboard that uses heat-mapping technology to learn where you place your thumbs as you tap each key, and then adjusts accordingly. So if you frequently tap ’s’ when going for ‘a’, it’ll expand the target for the ‘a’ key to prevent it from happening.

Android has some pretty awesome third-party keyboards, there’s no denying that — but none of them beat BB10’s. 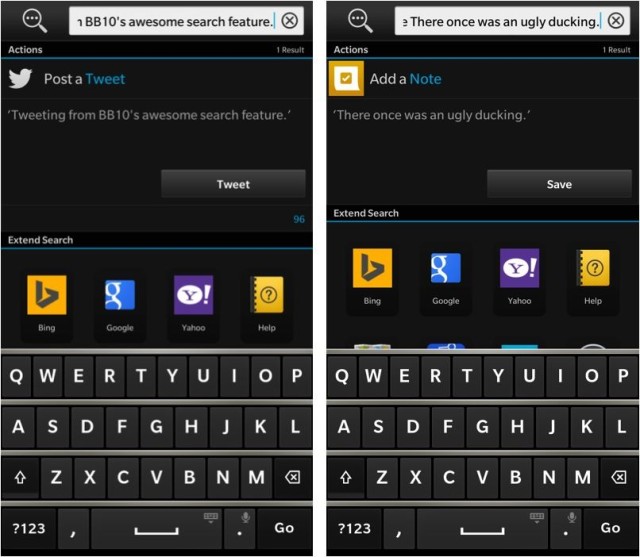 BB10’s search function doesn’t just help you find apps, contacts, and other data stored on your smartphone, but it’ll also provide actions and handy shortcuts, too. For example, you can type things like “Text Alex,” and it will give you a shortcut to a new message to Alex. If you type “Note buy strawberries on the way home,” it’ll create a new note with your text included. You can post tweets using this method, too.

If you use your smartphone for business and pleasure, then a feature like BlackBerry Balance is priceless. Balance essentially provides a BB10 device with two identities, then lets you quickly switch between them depending on what you’re using your smartphone for.

So you can have a personal identity that’s home to everything you use outside of work, and a business identity with its own apps, data, home screen layout, and wallpaper. Both are completely separate from each other, so you can’t access certain business data from the personal side, or share business data with personal contacts — and switching between the two takes seconds.

Balance isn’t a feature most consumers would use, but it could make Android much more useful in an enterprise setting. 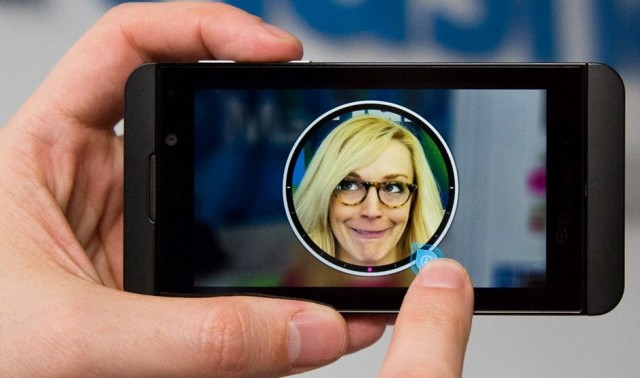 Last but by no means least, BB10’s Time Shift feature is what makes its camera app so useful — particularly for parents. When you take a picture with Time Shift, it captures a bunch of images at once to help you get the perfect shot. I know what you’re thinking — other smartphones do this, too — but not in the same way BB10 does.

Rather than presenting that bunch of images to you and asking you to choose which one you want to keep, Time Shift lets you cycle through individual faces. So if there are multiple people in the picture, you can ensure only the best poses are included in your final snap.

If you’ve ever used BlackBerry 10, you’ll be familiar with a lot of these features, and I think you’ll agree that they’d be a good addition to any operating system. There are some really nice innovations inside BB10, and although the platform itself isn’t going to topple Windows Phone or compete with Android and iOS, that doesn’t mean it’s completely dead and buried. If it didn’t take BlackBerry so long to get it to market, things may have been different.