Global smartphone shipments grew 41 percent to reach a record 990 million units in 2013, and Android-powered devices accounted for a whopping 79 percent of them. Despite the lowest growth rate in the platform’s history, Android phones still managed to ship four times the amount of iPhone and Windows Phone devices combined.

According to the latest data from Strategy Analytics, 2013 was “the year of Android.” Its annual growth rate slowed to 62 percent, but it still managed to ship a record 781.2 million smartphones worldwide. In comparison, Apple shipped 153.4 million iOS devices, while Microsoft shipped just 35.7 million Windows Phone handsets.

As a result, 2013 is a year Apple “will want to forget,” Strategy Analytics says. The iPhone’s annual growth dropped drastically to 13 percent, and the new iPhone 5c has failed to reach expectations. Apple now claims just 15 percent of the worldwide smartphone market.

Microsoft’s Windows Phone has established itself as a firm third-place smartphone OS, but it could only capture 4 percent of the smartphone market in 2013. It is still struggling to gain traction in “low-tier and premium-tier smartphone categories,” which the company is expected to address in 2014. 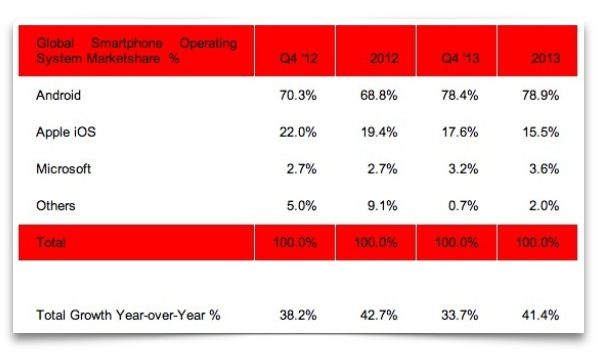 During the fourth quarter of 2013, smartphone shipments grew 34 percent to reach 290.2 million units, up from 217 million units during the same quarter in 2012.