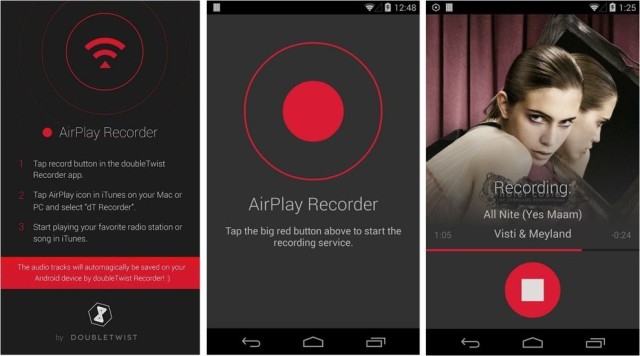 DoubleTwist, the company that has long been helping Android-powered devices work harmoniously with iTunes, today released a new Android app that lets users rip songs from iTunes Radio. Called AirPlay Recorder, the app essentially turns your Android device into an AirPlay receiver, then records all the audio that you play through it.

But is it legal?

AirPlay Recorder can literally pick up anything you can stream over AirPlay, including music from your iTunes library; music streamed through Spotify, Rdio, or Google Play Music; and even podcasts from apps like Pocket Casts. However, at this point, it appears it can only record music streamed for your Mac and PC (attempting to record music from an iOS device throws up some errors).

Setup is extremely simple; just open AirPlay Recorder on your Android device, hit the record button, and then send your music to it by selecting “dT Recorder” from the AirPlay device list in iTunes. The app records in real-time, so a 5-minute track would take 5 minutes to record, but it’s all done automatically — you don’t need to start the recording when the track starts, or end it when it’s finished.

AirPlay Recorder is free to download and free to use if you record everything at 32 Kbps (low quality). But if you want to upgrade to high quality AAC recording, then you can do so through an in-app purchase.

Of course, the question you’re probably asking yourself is, “how is this legal?” Well, DoubleTwist co-founder and president Monique Farantzos believes AirPlay Recorder isn’t breaking any rules.

“Recording has been around for decades, from audio cassettes (remember mix tapes?) to TuneIn radio’s recording feature,” Farantzos told Engadget. “Given that Apple built their iPod empire on letting millions of people rip CDs based on fair use, we don’t see how they could object to this app.”

That may be the case, but I can’t see Apple turning a blind eye to an app that lets users rip tracks from iTunes Radio without paying a penny. With that said, you might want to download AirPlay Recorder sooner rather than later, because there’s no telling how long it’ll be available for.