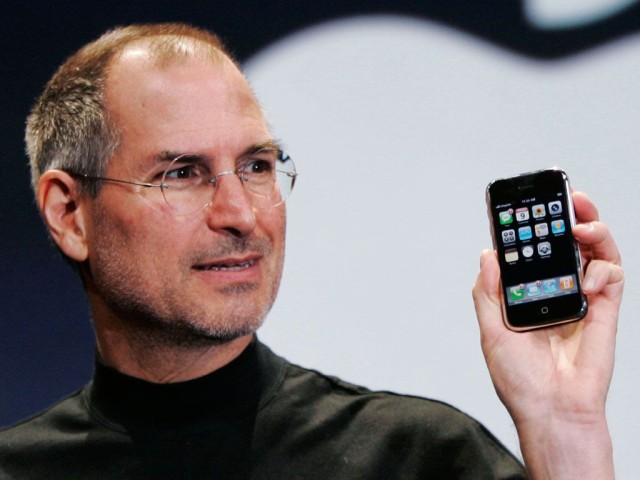 No matter how you feel about Apple and the iPhone, it’s impossible to deny that the device completely revolutionized the mobile industry when it was launched in 2007. Without it, the smartphones of today may have been completely different.

Take Android, for example. It’s the biggest competitor to the iOS operating system that powers the iPhone, and it’s now the world’s largest mobile platform — but the iPhone is the reason Android is what it is today. Google started work on the software way back in 2005, but it scrapped everything and started again the day after iPhone was revealed to the world.

When Steve Jobs unveiled the device at Macworld in January 2007, Google had been working on Android for two years, and it had more than 40 engineers assigned to the project. The Atlantic reports that all of them worked “worked sixty-to-eighty-hour weeks for fifteen months—some for more than two years—writing and testing code” to prepare Android for its release by the end of the year.

But everything they had done suddenly looked old and irrelevant by the time Jobs’s keynote was over.

“As a consumer I was blown away. I wanted one immediately,” said Google’s Chris DeSalvo in an interview with The Atlantic. “But as a Google engineer, I thought ‘We’re going to have to start over.’”

It’s hard to imagine it now, but before the iPhone, smartphones were drastically different. Very few of them had touchscreens, and those that did used traditional resistive touchscreen panels that were hard to use without a stylus. Most of them had physical keyboards instead, coupled with tiny screens.

There really was no smartphone software industry back then. You had the apps that came pre-installed on your smartphone by your manufacturer, and maybe a small number of third-party offerings you could add if you had a BlackBerry or Windows Mobile device — but there were no app stores like we have today.

Furthermore, smartphones were just too slow to provide an enjoyable software experience. But the iPhone changed all that, and in doing so it made everything that came before it look ancient.

It’s obvious when you see it.

“What we had suddenly looked just so . . . nineties,” DeSalvo said. “It’s just one of those things that are obvious when you see it.”

Andy Rubin, director of the Android team at the time, was in Las Vegas for the Consumer Electronics Show when Jobs was making his Macworld announcement. The Atlantic reports that he was so amazed at what he was seeing that he had his driver pull over on the way to a meeting so that he could finish watching the presentation.

“I guess we’re not going to ship that phone,” Rubin said to one of his colleagues.

The phone that Rubin’s team had been working on, codenamed Sooner, had many things in common with the iPhone. It had a proper web browser, it could multitask, and it had access to a full suite of Google apps and services, including Maps and YouTube.

What’s more, Sooner’s Android platform wasn’t just designed for that device — it also ran on other smartphones, and even tablets.

But Sooner was ugly. It maintained the physical keyboard that was so successful for companies like BlackBerry at the time, and its tiny display didn’t accept touch input. Rubin and other members of his team felt consumers would care more about its software than its looks, however, and they also felt that users would not get used to typing on the iPhone’s touchscreen.

Sooner: this is what Android smartphones would have looked like without the iPhone.

But it quickly became clear that Sooner just wasn’t going to cut it. The iPhone was far too innovative; it had special software optimized for fingers — not styluses — with gorgeous apps and a built-in iPod. The device itself also looked incredible.

Within weeks, the Android team had put aside everything that it had done up to that point and completely reconfigured its platform. A new phone codenamed Dream, which had a large touchscreen, became its new focus, and Google tried to differentiate it by concentrating on things the iPhone couldn’t do.

The company released its first Android phone, which was built by HTC, in late 2007. It still had a slide-out physical keyboard, but it looked nothing like Sooner — and the software it was running was totally different.