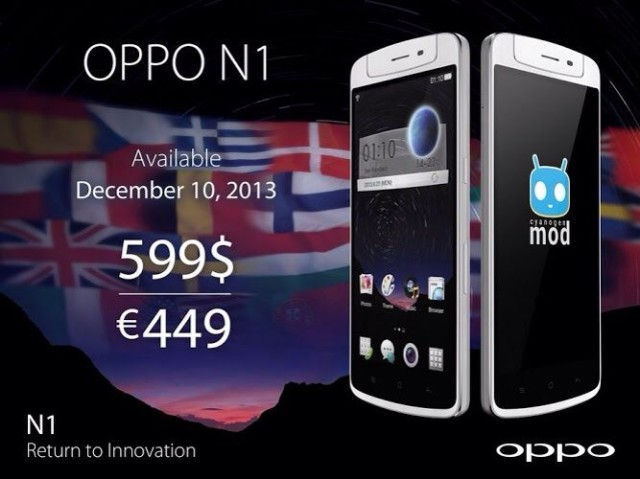 Oppo’s flagship N1 handset, which went on sale in China in late September, is going global on December 10. The device is fully equipped to compete with the latest flagships — packing a 5.9-inch 1080p display, a quad-core Snapdragon 600 processor, and a 13-megapixel camera — and it’ll cost $599 in the U.S. and €449 in Europe.

If you’re the kind of person who immediately flashes a CyanogenMod ROM onto their new smartphone the day they get it, then the Oppo N1 should be right up your street. Not only does it boast high-end specifications and an attractive design, but it also comes with CyanogenMod pre-installed.

Those who aren’t so keen on CyanogenMod can choose to run Oppo’s own “ColorOS” user interface instead. It’s still Android at the core, but it’s a heavily modified version with Oppo’s own skin and features — just like Samsung’s TouchWiz or HTC’s Sense.

The N1 isn’t just unique when it comes to software, either. It also has a 13-megapixel camera that rotates 206 degrees, so it acts as both a rear- and front-facing camera as and when you need it.

Here’s everything you get with the N1:

The N1 will sell for $599 in the U.S. and €449 in Europe when it goes on sale on December 10. It’s pretty pricey, then, but you’d expect a premium device like this to come with a premium price tag.