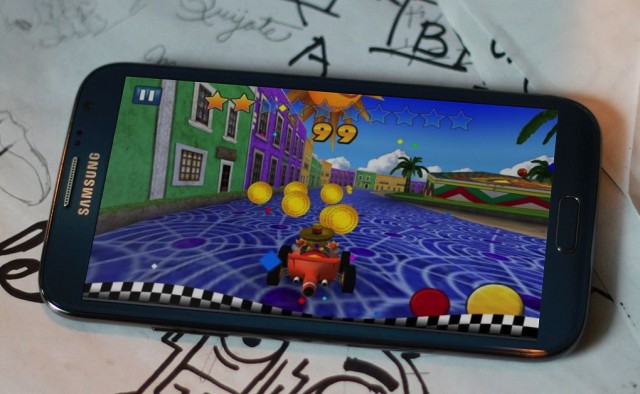 SEGA has today announced its mobile games lineup for the coming months, with a number of notable new titles heading to Android and iOS.

Highlights include a revamped Sonic the Hedgehog 2 — which will be available on Android for the first time; Sonic & SEGA All-Stars Racing Transformed, and a rhythm franchise that originally made its debut on the Nintendo DS.

Sonic the Hedgehog 2 is undoubtedly the biggest out of the bunch. It’s already been available on iOS for some time, but SEGA has made a number of improvements that’ll make you want to play it all over again.

“Sonic fans and newcomers alike will see Sonic the Hedgehog 2 in a brand new light,” the company says, with remastered audio and upgraded visuals running at a “silky smooth” 60 frames-per-second. The title will also be available on Android for the first time ever, while existing owners on iOS will get the update free.

Another title that will arrive on both platforms is Sonic & SEGA All-Stars Racing Transformed. The original has been a huge success on mobile — it’s one of the most enjoyable kart racing games there is — and its successor promises even more.

In addition to “all of the competitive, fast paced, transforming action from its wildly successful console counterpart,” the title will also include a host of new features and improvements, with a reimagined world tour mode, 4-player local and online races, and comprehensive social integration.

“This will be the ultimate multiplayer racer on mobile,” according to SEGA.

That’s all SEGA has planned for Android for the time being, but iOS users are in for even more, including the much-anticipated Demon Tribe from Jet Grind Radio developer Masayoshi Kikuchi.

The role-playing game is set in a dark fantasy world that faces the threat of demon infestation, and players are tasked with capturing and fusing demons to build the ultimate team. Demon Tribe blends MOBA, card collection, and action-RPG game elements, SEGA says, with both cooperative and competitive engagements modes with support for up to six players.

Finally, SEGA will be bringing Rhythm Thief & the Paris Caper to iOS this year. The franchise originally made its debut on the Nintendo DS, but this particular title has been designed exclusively for the App Store.

Like its predecessors, it features rhythm-based gameplay that will have you tapping to the beat as you join Raphael and his faithful canine companion Fondue as they investigate the mystery of his father’s disappearance.

Sonic the Hedgehog 2 will be available on Android and iOS next month, while Sonic & SEGA All-Stars Racing and Demon Tribe will be available in “winter, 2013.” Rhythm Thief & the Paris Caper will make its App Store debut in early 2014.