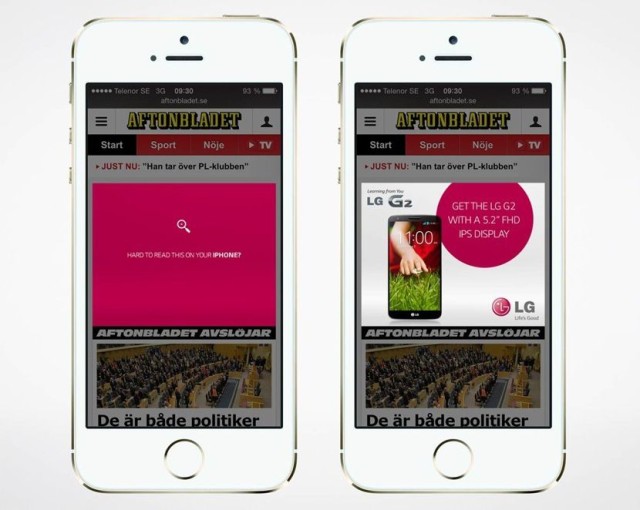 When you’re browsing the web on your mobile, prepare to stumble across new popups that bash the smartphone you’re using.

LG, together with advertising agency M&C Saatchi, has designed intelligent new ads that find out what smartphone you’re using to take trolling to a new level. They’ll pick common faults with your iPhone, your Galaxy S4, or your HTC One — and then tell you why the LG G2 is better.

The new ads, which are currently exclusive to Sweden, are designed to respond to the smartphone you’re using, so they change depending on your device. For instance, if you’re using an HTC One — which doesn’t have the best battery life out there — the ad will as if you’re “tired of charging your HTC One?”

It will then tell you that you could get 30% longer battery life with an LG G2.

iPhone users will see the ads take aim at the handset’s smaller display. “Hard to read this on your iPhone?” they read, before pointing out that the LG G2 has a whopping 5.2-inch screen. If you have a Galaxy S4, the ads will pick on its processor, which is 20% slower than the G2’s, apparently.

LG’s creative new method of ad trolling will surely be annoying after a while, but you have to admit it’s pretty clever, too. At least they don’t suggest you’re stupid for waiting in line for an iPhone, or for buying a smartphone that looks identical to its predecessor. Take note, Samsung.