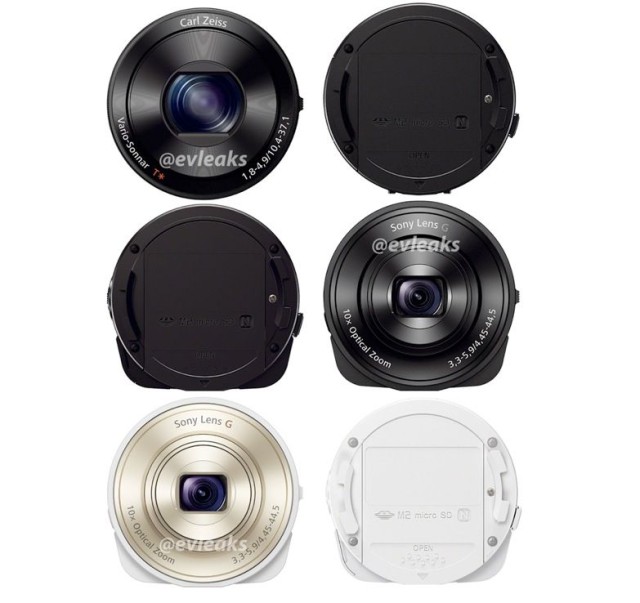 At an event in Berlin in just under two hours time, Sony will announce two attachable lenses that you’ll be able to stick onto the back of your smartphone to take better photos. They’re called the QX100 and the QX10, and you can see exactly what they’ll look like in the leaked press images above — and exactly how they’ll work in the leaked TV ad below.

Sony certainly seems to be having a hard time keeping its new products under wraps ahead of their official unveiling today. So if you were hoping for some nice surprises, you may want to close this page now and stay away from the Internet until after Sony’s event.

In the picture above, you’ll see the new QX100 and QX10 attachable lenses that are designed to work alongside your smartphone. You can either clip them onto the back using a special add-on, or you can use them separately. Sony will also be making special cases for its own Xperia devices that the lenses can be attached to.

Here’s what we think we know about the lenses so far: The QX10 will be the cheaper of the two, but it’ll still cost you $250. The QX100 will cost $450. Both lenses will be able to shoot 1080p video at 30 frames-per-second, and both feature optical image stabilization.

Whichever option you go for, you’re going to be drastically improving the images you take on your smartphone. The lens will connect to your Android and iOS devices via Wi-Fi using Sony’s PlayMemories app, and you’ll be able to control things like zoom, exposure, white balance, focus, and more using your phone.

All of the images and videos you take can be stored on your phone and the storage built into the lens itself, and there’s NFC for quick and easy pairing with compatible Android smartphones.

The QX100 and QX10 both look like very impressive pieces of kit, and we can’t wait for Sony to make them official. You can expect that to happen very shortly, so keep an eye on Cult of Android.