Google announced Android 4.4 KitKat on Tuesday, and it has become tradition for the company to erect a new statue on the lawn of its Mountain View headquarters with every major Android release. So we weren’t surprised to see the search giant upload a video of the statue’s unveiling to YouTube.

However, we were surprised to see what looks like Google’s next-generation Nexus smartphone towards the end of the video.

As you can see from the image above, the gentlemen filming the statue’s unveiling at around 38 second in is using a Nexus smartphone that we’ve never seen before. It kind of looks like a smaller Nexus 7, with the same Nexus branding and soft-touch back — but it’s quite clearly a smaller device.

It also has an LED flash under its camera, and what looks like an LG logo nears its bottom edge — two things the Nexus 7 does not have. You’ll also notice the device is slightly larger than its predecessor, the Nexus 4, which is being held by the lady in the blue top. 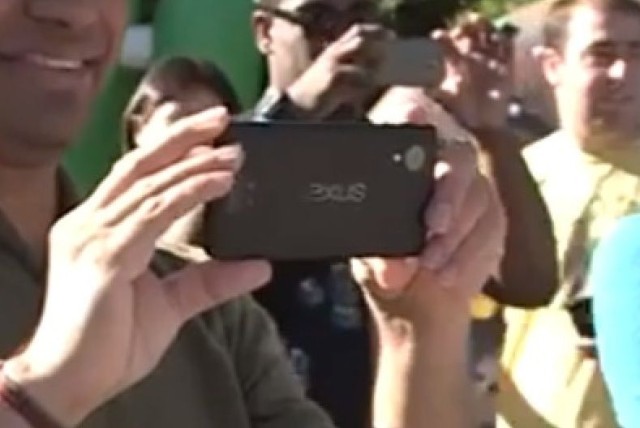 So, is this Google’s next-generation Nexus? It certainly looks like it, and the fact that Google quickly pulled the video from its official YouTube channel after the leak was spotted only strengthens that theory.

It’s also worth pointing out how big the handset’s camera lens is — remember when Google’s Vic Gundotra said that the company was focused on making Nexus phones with “insanely great” cameras? This could be its first smartphone to follow that vision.

Google recently reduced the Nexus 4 to just $199, and after the 8GB model sold out earlier this week, the company said it would not be restocking it. So we expect the new Nexus to appear very soon, and it looks like this could well be the first glimpse you’ll get of it.

If you want to check out the video for yourself, you’ll find it below — thanks to Engadget China.