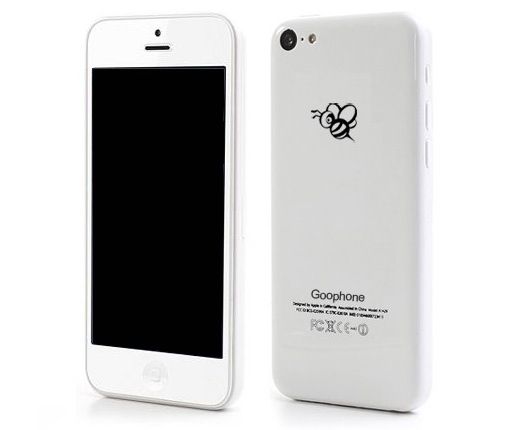 While the iPhone 5C will certainly be cheaper than Apple’s high-end iPhone 5S, it’s likely to be too expensive still for many in emerging markets. But smartphone clone specialists Goophone already have an Android-powered alternative in the pipeline that will sell for just $100 in China.

Called the “i5C,” the device looks almost identical to the real iPhone 5C based on the leaks we’ve seen. Just don’t expect a Retina display.

The i5C will have a 4-inch display — which is exactly what we expect from the iPhone 5C — but it will only offer a qHD (960×540) resolution. Apple’s offering will reportedly come with pretty much the same display that packed into the iPhone 5, which boasts a significantly greater 1136×640 resolution.

Aside from the display, though, the i5C looks pretty nice internally. In addition to a 1.2GHz dual-core processor, it will have quad-band GSM and 3G connectivity, 1GB of RAM, an 8-megapixel rear-facing camera, and a 2-megapixel front-facing camera. It won’t compete with high-end Android smartphones, of course, but it’s certainly in there with the latest midrange offerings.

Those who are interesting in the i5C are unlikely to be too interested in its internals, however. They’ll be most interested in its external design, which is pretty much exactly the same as the iPhone 5C’s. The only things missing are the Apple logo and iPhone branding.

Goophone is famous for its smartphone clones, and it’s long been making knock-offs of Apple’s latest devices. In fact, the company began selling its own iPhone 5S clone back in March — way ahead of the real handset’s official unveiling.

You’ll have to wait until after the iPhone 5C’s released to get your hands on the i5C, though. But when it does become available, it’ll cost just $99.