EE has been the United Kingdom’s only 4G provider for around nine months now, but at the end of this month, it’ll finally see some competition. O2 has today announced that its own 4G network will launch on August 29, with prices starting at £26 per month. The service will reach three cities initially, with ten more scheduled to be added by the end of the year.

Those first three cities include London, Leeds, and Bradford, while the other ten are Birmingham, Newcastle, Glasgow, Liverpool, Nottingham, Leicester, Coventry, Sheffield, Manchester, and Edinburgh. 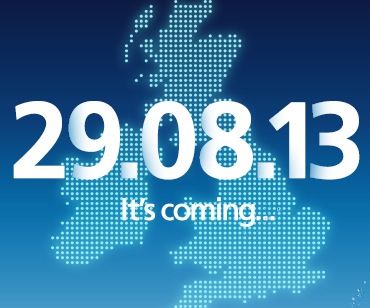 In comparison, EE’s network is now available in 95 towns and cities across the U.K., covering almost 60% of the U.K. population. The carrier also plans to bring 4G services to 98% of the U.K. by the end of 2014. But of course, EE’s network has been around a lot longer than O2’s, so it’s going to have that coverage advantage for some time.

It also has the advantage on speed and price. EE’s basic 4G plan is £21 per month, or just £15 if you only want data. O2’s is £26 per month, and it’s unclear how much you’ll have to pay upfront for the latest handsets. If you already have a 4G phone, you can upgrade to one of O2’s 4G plans and simply pop a new SIM card into it.

It’s worth noting that the iPhone 5 isn’t compatible with O2’s 4G network because it doesn’t support the company’s cellular bands, and it won’t be compatible with Vodafone’s, either. However, Telefonica U.K.’s CEO, Ronan Dunne, told the BBC he “would quite frankly be gobsmacked if their [Apple’s] roadmap didn’t address that issue.”

Vodafone and Three have confirmed that their 4G networks will also begin rolling out this year, but neither has confirmed launch dates yet.