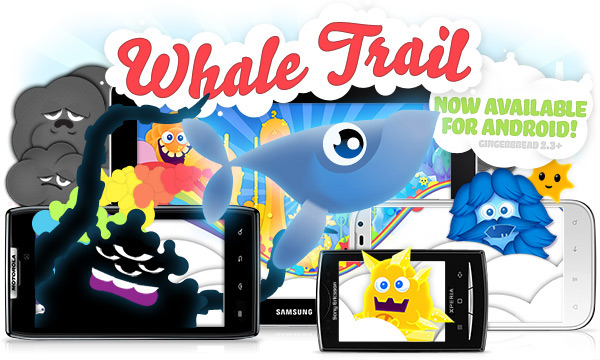 Whale Trail is a popular sidescroller that originated from the Apple App Store. The game can best be described as Tiny Wings meets Angry Birds on acid. Whale Trail is a colorful, charming, quirky and addictive game — not to mention one of my personal favorites.

As we’ve already told you, Whale Trail recently launched on the Android Marketplace. I got to sit down with the head of the company behind Whale Trail to talk about the pros and cons between developing for Android and iOS.

Mills (better known as the “CHIEF WONKA” of ustwo™) was kind enough to chat with me about Whale Trail’s success. He also gave his take on the pros and cons of Android and iOS development. Coming from the perspective of a dev that has made it big on both platforms, we figured that he would have some interesting things to share.

Before you jump into the interview, make sure to check out this whacky video from last October to get a taste of what ustwo™ is like:

CoA: Why go Android? Have you guys been planning on releasing in the Market since Whale Trail launched in the App Store?

Mobile game development is unquestionably the most exciting arena to be in right now, and the lure of the golden treacle that awaits you IF you smash it, is enough to make a man go clinically mad.

Apart from an elite few, the chance of your title on a single platform hitting the jackpot is unlikely. On top of that, good games cost money to make. We originally invested £150,000 ($196,635) worth of ustwo™ manpower to bring it to market. Once launched on iOS and having proved it had legs, we had the confidence to make the move to Android.

Android has always been part of our studio vision; with a 50/50 split of Android and iOS developers in house, we don’t really see them as two separate platforms… instead we focus on making games and entertainment. If the platform has power potential, we will dive right in.

We had originally planned to release Whale Trail on both platforms at the same time, but in the end, due to major overruns in the iOS development process, it wasn’t possible. It was a real blow at the time as we were confident that the game was good enough to peak the interest of the big websites, with any noise generated benefiting downloads on both platforms.

Focusing on iOS for launch, we decided to sell at a premium of 69p ($0.99). We thought we had a good chance of being promoted from the get go by Apple as they regularly promote quality original titles, and that’s exactly what happened. Whale Trail was “Game of the Week” in 78 countries around the world, meaning that combined with the huge PR push, we had over 32,000 downloads over the launch weekend. Apple promotion was a game changer for us, giving us a huge head start. It was also unbelievable to know that Apple had so much faith in us.

After the initial iOS launch, we focused on re-working the game by adding a new challenge mode (having listened to user feedback) and the move to Android. In the future we will make sure we launch on both platforms at the same time. Double trouble is the ultimate and the only way to achieve pure power.

CoA: How has Whale Trail fared on the Android Market? Are you impressed by the numbers? How do the initial results compare to the game’s success in the App Store?

It’s going to be very difficult to compare fairly as we launched on iOS with huge word of mouth buzz, global Apple support, and almost every gaming website press coverage. If we’re lucky enough to get quality Google promotion, then a more realistic comparison could be made. So far we’ve been massively impressed with the release on the Android Market and within 48 hours we’ve received over 2,500 downloads at 69p ($0.99) and an average 4.5 rating.

The pickup has been amazing and this is a green light for us. This tells us that quality games have a massive chance of doing well. Within that same 48 hours we were the 8th best-selling new release. If we can get into a prime visible slot, we have a very good chance of taking steps towards recouping our investment.

CoA: What’s been your favorite platform to develop for so far? Are there aspects of Android development that make it a better experience in certain ways, or does iOS take the cake?

What has fascinated me is the strict divide that occurs between iOS and Android users in the tech community. Most people are either in one camp or the other, almost like rival gangs who won’t stray from their turf. But, this is slowly changing as people begin to push their own boundaries driven by the thought of what else is out there.

As a developer I can say for us, up until recently, that Apple’s App Store was a more appealing place to sell premium apps. I suppose in a way the process seemed simpler and more straightforward at the time. However, with more and more Android handsets being sold, increasing the size and demand of the market, as well as an improved storefront that rivals the App Store in many ways, Android is now a publishing force to be reckoned with… so much so in fact… I’d like to think all future ustwo™ app launches will launch on both platforms simultaneously.

In terms of client work, we’re totally platform agnostic, offering solutions to clients based on their business needs. But for our own IP app releases that come out of ustwo’s CWA department – Content With Attitude, our focus has been on iOS because of the small size and specialism of the team. In the last couple of years the app market has very much been shaped by huge levels of press interest and it’s been undeniable that iOS has been the poster boy platform, meaning more developer interest in it. A downside of this ‘attention’ is that now it’s harder than ever to get your product out there and in front of users due to intense competition.

For us, the press interest has been great for the studio. Many of our products have been labelled as succailures (successful failures), simply because they haven’t sold in their millions but have generated a lot of mainstream media interest which in turn has helped raise the profile of the studio.

On a different note, I’ve been massively impressed with the Top New Chart on the Android market. The seven-day rolling chart made up of the last month’s releases is great for developers as it helps with discoverability, as newly launched app don’t need to compete with established winners to get standout. It’s this that has helped take Whale Trail to no.5 in new releases within the first 5 days, and an overall position of no.62 with only word of mouth and PR driving downloads.

CoA: Anything else you’d like to say about the future of Whale Trail? We’re all ears.

In a matter of weeks we’re excited to announce that we’ll be bringing Whale Trail to the NOOK Color and NOOK tablet. We see a huge opportunity to sell massive volumes there, as the curation of apps is absolute quality and the competition is far less in terms of volume.

Overall we’re now selling around 1,350 Whale Trails a day, which we’re happy with. We’re seeing over 1,000 hits to our Gruff Rhys music video and 2,000 hits a day for our Whale Trail trailers. We’re currently finalizing our latest update for both platforms, which will include an updated ‘endless mode’ with more power ups and another 32 levels. And this time we’re taking users to the dark side.