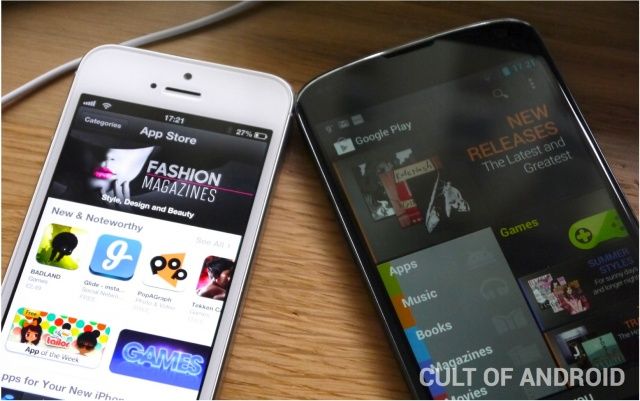 Google Play will overtake the App Store’s recently celebrated 50 billion downloads and become the most popular app platform in the world within months, according to a new report from Distimo. Driven by popular devices from Samsung, Google Play is currently seeing over 500 million more app downloads per month.

That’s because Android is a much bigger platform right now, with 900 million Android devices in the market versus the 600 million running iOS. This will help Google Play catch up with — and then take over — the App Store within a matter of months.

That’s despite a continued lack of flagship applications from certain developers, and a user base that traditionally spends significantly less on mobile software. The Telegraph notes, however, that Android has been winning over big developers recently:

Android, however, has recently won over growing number of app developers, with even the BBC moving to a new approach that attempts to deliver its popular apps simultaneously on both platforms.

Although few apps launch first on Android, a growing number of the most popular are now available on both and the gap between launches is narrowing. Boradcaster [sic] Sky has developed applications specifically targetting the most popular mobile phone models.

If the iOS platform was just as big as Android, then App Store downloads would be way out in front. Asymco analyst Horace Deidu notes that the average app downloads per device is 83 on iOS and just 53 on Android.

“The sheer weight of Android units will generate more downloads but on a per device basis the iOS devices do seem to consume more apps and the gap is not narrowing,” he said. “What would be valuable would be the revenue per app on Play (the figure for iOS is about $0.23). That, as far as I know, remains unknown.”