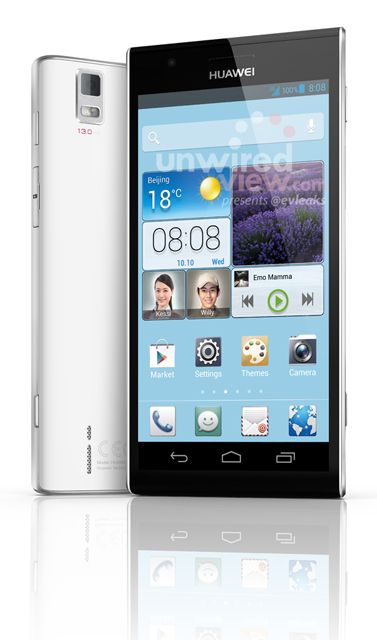 The Huawei Ascend P2, a new high-end Android smartphone that’s expected to get its grand unveiling at Mobile World Congress next month, has already shown its face in a leaked press shot. A previous rumor claimed the device would be more of a midrange handset than a high-end contender, but according to the latest information, there’s nothing midrange about this device.

UnwiredView reports that the Ascend P2 is expected to offer a 1.8GHz quad-core Huawei HiSilicon K3V2 processor, a 4.5-inch 1080p display, 2GB of RAM, and a 13-megapixel camera. It’s also said to feature a large 3,000 mAh battery, which will be packed into a “wafer thin” form factor.

The Ascend P2’s only weakness could be its processor. Although it is a quad-core chip based on the ARM architecture, it’s a Huawei design that may not give quite the same level of performance you’d get from a Tegra 3 or Snapdragon S4 Pro processor. Having said that, it does mean that the Ascend P2 can offer high-end specifications at a lower price.

These specifications are a little closer to those offered by the Ascend D2, Huawei’s new flagship smartphone, which was unveiled at the Consumer Electronics Show earlier this month. A previous rumor said, however, that the Ascend P2 wouldn’t be quite as high-end, offering only a 720p display, and an 8-megapixel camera.

With that being the case, I wouldn’t follow these specifications too closely until we get the official word from Huawei. Whatever the internals may be, however, you can see from the picture above that the Ascend P2 is a nice looking handset.