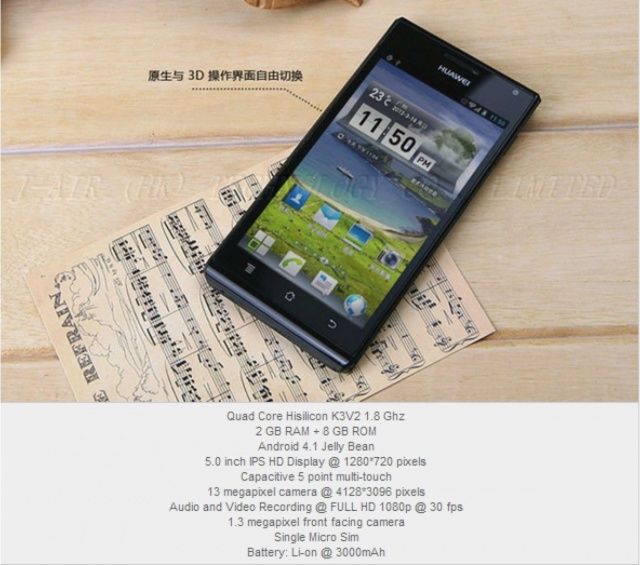 Huawei unveiled a number of new smartphones at the Consumer Electronics Show in Las Vegas last week, but it appears the Chinese company may have another device to bring us in the coming months. A press photo, including specifications, has been leaked for the Ascend P2. While it’s not the flagship Ascend D2, it still looks to be a very impressive handset.

Powered by the same 1.8GHz quad-core Hisilicon K3V2 processor that’s packed into the Ascend D2, the Ascend P2 will certainly be no slouch. It also boasts a 5-inch 1280×720 display, 2GB of RAM, and 8GB of internal storage (expandable via microSD). There’s a 13-megapixel rear-facing that’s capable of shooting 1080p video, and a 1.3-megapixel front-facing camera.

The device is also expected to get a large 3,000 mAh battery, and it’ll ship with Android 4.1 Jelly Bean pre-installed.

While the Ascend P2 may not be Huawei’s flagship Android smartphone, it certainly has all the ingredients to be a high-end smartphone — one that’s expected to come with a modest price tag.

Huawei is expected to make the Ascend P2 official at Mobile World Congress in Barcelona next month. Cult of Android will be at the show, so as soon as these details are confirmed along with pricing and availability, we’ll update you.