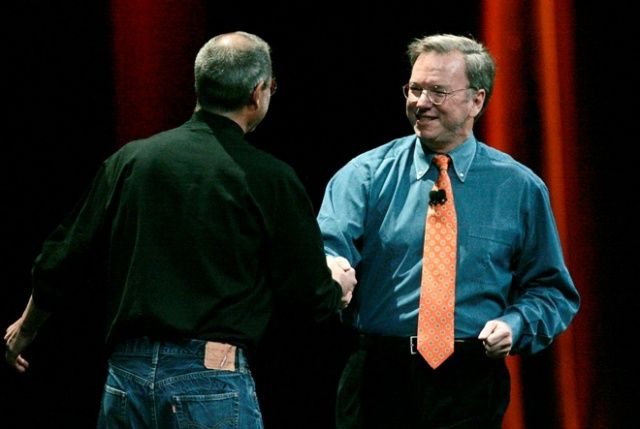 Apple co-founder and former CEO Steve Jobs threatened Palm CEO Edward Colligan with patent litigation if he did not agree to stop poaching Apple employees, according to a court filing that was made public on Tuesday.

Confidential emails between the pair, along with documents from Adobe and Google, have surfaced in a civil lawsuit that claims a number of major companies in Silicon Valley violated antitrust rules by entering into agreements not to recruit each other’s employees. Five employees are now fighting for class action status and damages for lost wages as a result of the “no-hire” agreements.

These agreements were first reported on back in 2009 during an investigation into the matter by the U.S. Department of Justice, which found that a number of Silicon Valley’s top firms kept do-not-call lists to avoid competitive recruiting. Some of the firms included in the scheme were Apple, Adobe, Google, Intel, Intuit, Pixar, and Walt Disney.

The issue has now been escalated as those employees who claim they were affected by the agreements fight for class action status and damages for lost wages, which could amount to hundreds of millions of dollars.

On Friday, U.S. District Judge Lucy Koh ordered current Apple CEO Tim Cook to provide a deposition for the case after she told lawyers that she found it “hard to believe” that Cook — Apple’s chief operating officer at the time — was unaware of such agreements between Jobs and other executives.

Emails involving some of those executives have now shed new light on the agreements, giving us an idea of just how seriously they were taken. Back in August 2007, Jobs emailed Colligan and threatened him with patent litigation if Palm did not agree to stop chasing Apple employees.

According to Colligan, Jobs first “proposed an agreement between Palm and Apple” that would prevent them from poaching each other’s employees. Jobs suggested that “if Palm did not agree to such an agreement, Palm could face lawsuits alleging infringement of Apple’s many patents.”

Colligan suggested that any such agreement would be illegal, and that Palm had patents of its own that it could use to countersue Apple. This clearly wasn’t the response Jobs was hoping for. 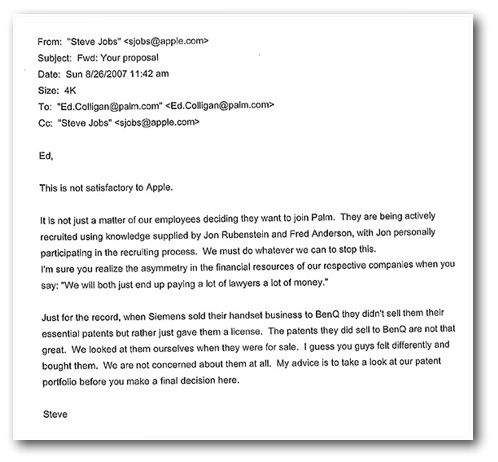 “It is not just a matter of our employees deciding they want to join Palm,” Jobs replied. “They are being actively recruited using knowledge suppled by Jon Rubenstein and Fred Anderson, with Jon personally participating in the recruiting process. We must do whatever we can to stop this.”

“I’m sure you realize the asymmetry in the financial resources of our respective companies when you say: ‘We will both just end up paying a lot of lawyers a lot of money.'”

Apple isn’t the only company to be involved in these agreements, either. The recent court filings also include internal emails between Google chairman Eric Schmidt and other Google employees, as well as a documents from Adobe and Google that list “companies that are off limits.” 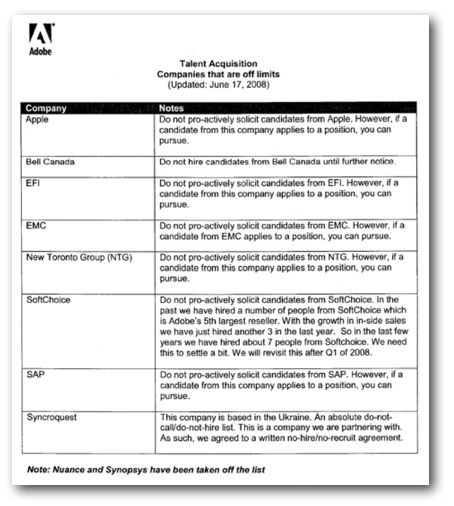 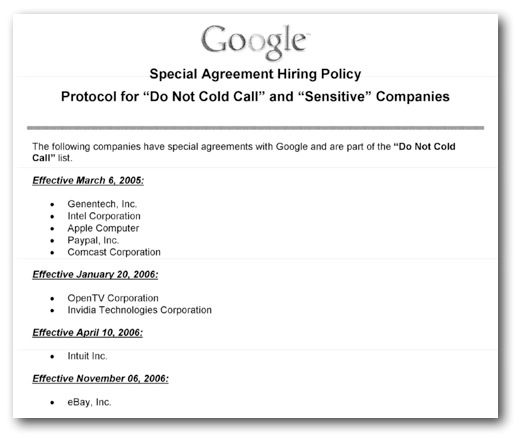 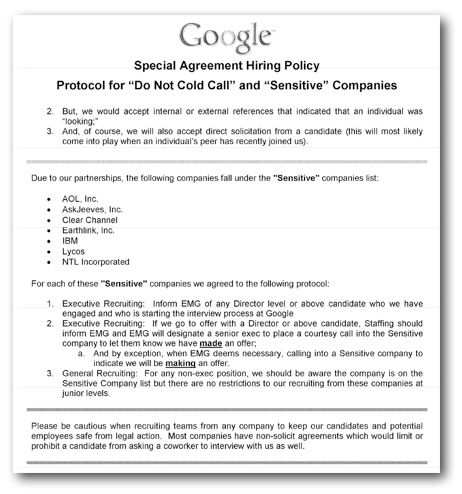 In one email between Schmidt and Google employee Arnnon Geshuri, it is revealed that another Google staff member will be fired “within the hour” for contacting an Apple staffer about job vacancies. This follows an email from Jobs that requested Google’s recruiting department to stop chasing Apple staff. 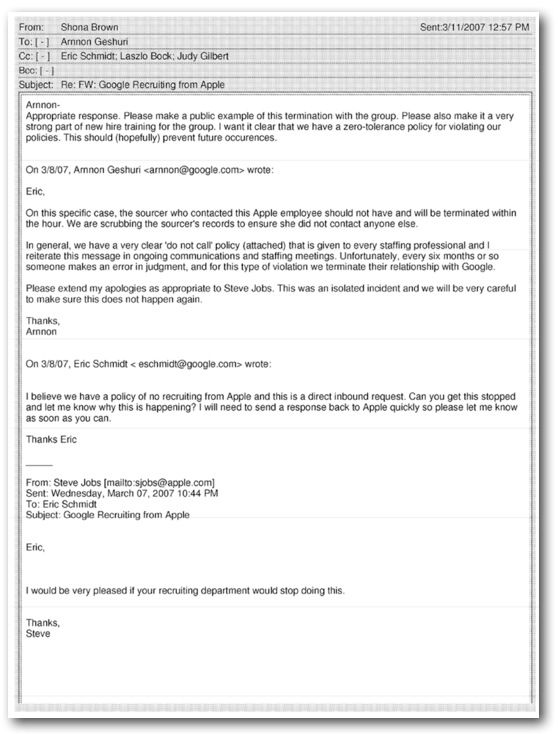 Judge Koh is currently deciding whether the civil lawsuit can proceed as a class action, Reuters reports. If she decides it can, then the plaintiffs would have more leverage to extract a large settlement. According to attorneys, that settlement could be hundreds of millions of dollars.

You can see more of the documents, which were obtained by The Verge, below. 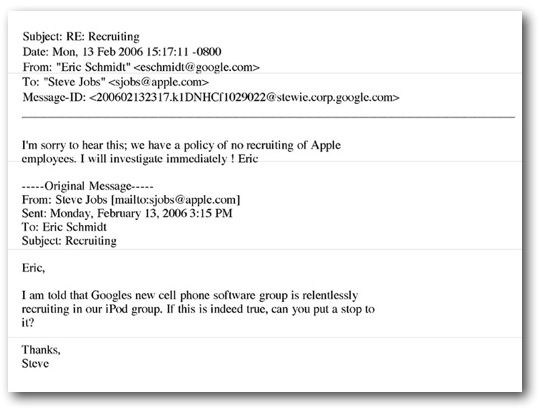 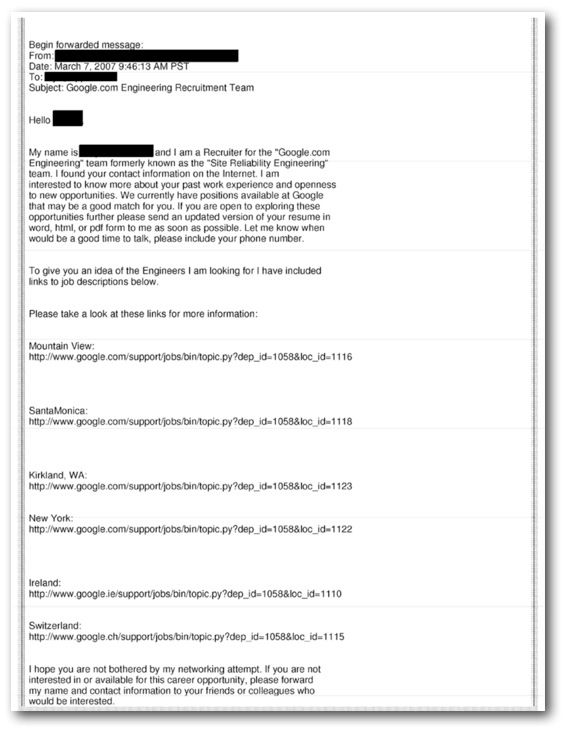