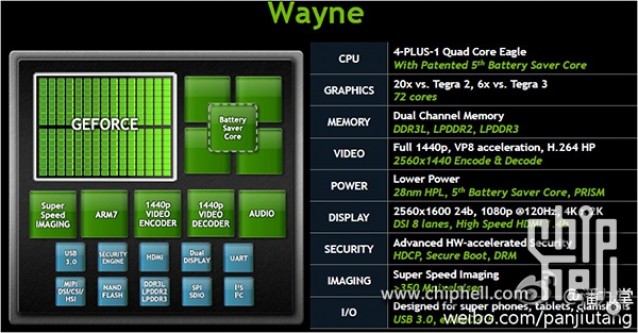 NVIDIA’s quad-core Tegra 3 processor powers some of today’s most impressive Android devices, and you certainly wouldn’t call it dated. But the company has another processor up its sleeve that blows the Tegra 3 right out of the water. A slide, purportedly detailing the next-generation Tegra 4 (nicknamed “Wayne”), has been leaked — and it reveals that NVIDIA plans to bring a “Quad Core Eagle” CPU with 72-core graphics to your smartphone.

The slide was posted to Chinese forum Chiphell after making its way around the social network Sina Weibo. It reveals all of the specifics regarding NVIDIA’s upcoming Tegra 4 processor, which, like the Tegra 3, looks like it’s going raise the standard of mobile performance yet again.

According to the slide, the chip is capable of powering 2560×1600 displays with 4K video playback. It also supports USB 3.0 connectivity.

But despite all this, the Tegra 4 is likely to consume less power than its predecessor, thanks to its new 28-nanometer manufacturing process. That’s the same process employed by Qualcomm’s new Snapdragon S4 Pro chip, which is generally considered to be better than the Tegra 3 for this reason.

It’s unclear when the Tegra 4 will begin powering our smartphones and tablets, but we’re expecting an official announcement from NVIDIA in early 2012.