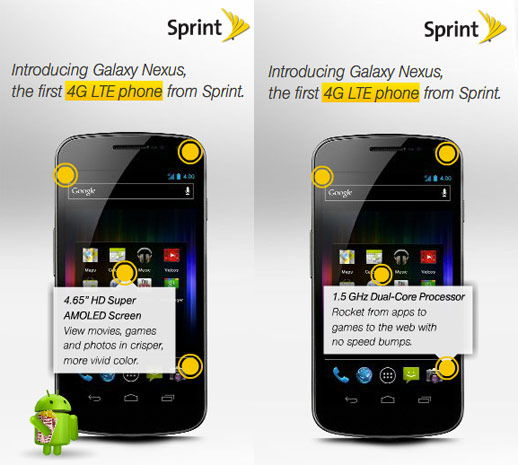 Well what do we have here? It appears an online ad has gone out a bit prematurely (now yanked), and by the looks of it, has let the cat out of the bag regarding a possible Sprint version of the Galaxy Nexus. That’s right, your eyes do not deceive you. It looks like Sprint will be getting the Galaxy Nexus, and I’d bet it’s safe to say, it will be coming soon. The ad, which was spotted over on CNET, features what may have been Sprints biggest announcement of the year.

Not only will the Galaxy Nexus be Sprint’s first 4G LTE phone, but it also looks like it will be a faster 1.5GHz dual-core version. We always new other carriers were going to have their crack at the Ice Cream Sandwich wonder device, and it looks like Sprint will be the first to have at it after Verizon’s brief exclusive. We can only assume Sprint was holing this news for a special event such as CES or CTIA, but now that the surprise has been blown, it will be interesting to see what they do.

How many Sprint customers are smiling ear to ear right now?