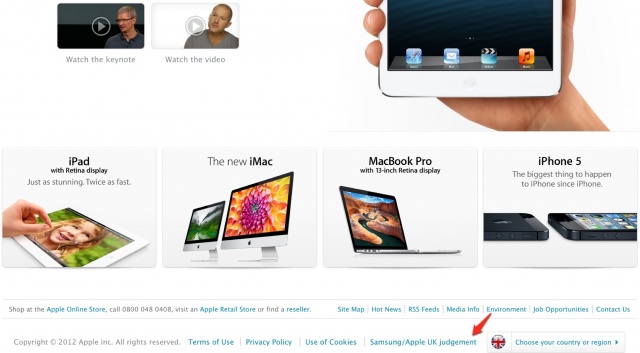 A court of appeal has reprimanded the “non-compliant” statement Apple published on its website regarding the case against Samsung’s Galaxy Tab in the United Kingdom. Apple now has 48 hours to correct the statement, which must then be displayed on the homepage of its website until December 14.

Apple published its initial statement last week, but it wasn’t at all easy to spot. The Cupertino company published it on a new page of its website, which was free from any Apple branding, then added a tiny link to it at the bottom of its homepage. The court deemed this “non-compliant” with the order made by the court earlier this month.

Lord Justice Longmore, Lord Justice Kitchin, and Sir Robin Jacob indicated that they were not happy with Apple’s “failure to put a simpler statement on the site,” The Guardian reports, and they’re demanded an alteration. During a hearing on Thursday morning in a London court, Apple was given 48 hours to make the changes, which must be published on its homepage — not another page — in at least 11-point font.

“The objection was that Apple had added to the statement that the court of appeal had ordered, so did not comply with the original order, and furthermore that the additions were not accurate,” explained Darren Smyth of EIP Partners.

Apple attempted to convince the court that it would take at least 14 days to make the correction, according to the report — a claim that one judge said he “cannot believe.”

Apple lost its case against the Samsung Galaxy Tab in a U.K. court earlier this year, and it was ordered to publish a statement on its website and in prominent British magazines and newspapers to explain that its claims against the device were unfounded. While it did do that — sort of — it also added in details from other cases against Samsung in the U.S., in which Apple was successful.

Jacobs said Apple’s statement was “a plain breach of the order,” Bloomberg reports.