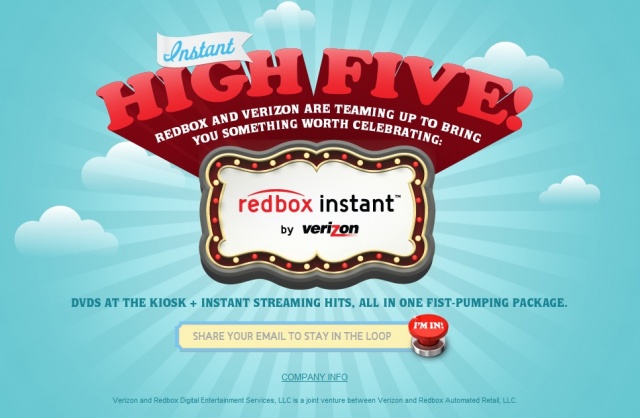 Okay, so I was being sarcastic about the clever name. Nevertheless, the joint venture announced by Redbox and Verizon back in February has finally given birth to an official name, and that name is Redbox Instant by Verizon. Together, Verizon and Redbox plan on bringing yet another video on-demand streaming and download service to the market. As long as Verizon doesn’t screw it up with pricing, the Redbox kiosk/streaming combo could be a real winner.

The new brand, Redbox Instant by Verizon, was created to offer U.S. consumers the best of both worlds, digitally and physically. All consumers have immediate access to new-release DVD and Blu-ray Disc® movie rentals through more than 36,800 Redbox kiosks nationwide and can instantly view popular entertainment content anywhere, anytime, using the devices they prefer with a Redbox Instant by Verizon subscription and video on-demand streaming service. The venture plans to introduce its unique product portfolio in the second half of 2012.

Information is still scarce, and although we have an official name to talk about now, it would be nice to have a bit of information in regards to pricing, subscription plans, and supported devices. I guess we’ll just have to be patient while Verizon sits back and figures out a way to screw this up.

If you want to hand over your email and “stay in the loop,” hit up the source link below.