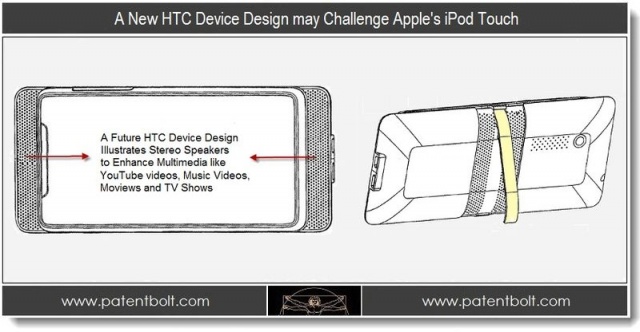 According to an HTC patent filed back in 2011 and a new device design discovered by Patent Bolt, it appears HTC is working on a handheld PMP device to rival the ever dominant iPod Touch. With companies like Philips, Sony, and Samsung all failing to chip away at the iPod Touch’s domination, I guess it couldn’t hurt to give HTC a chance. This new device combined with the new Google Play model could give this HTC device a fighting chance but I wouldn’t put my money on it.

This future HTC handheld device features slide-out stereo speakers on the front of the device, a kickstand on the back, and unlike most HTC handheld patents, makes no reference to cellular bandwidths. The lack of smartphone verbiage makes a strong argument for this device being a PMP (Portable Media Player) similar to a Galaxy Player but with a unique and enhanced multimedia design.

What do you guys think, does an HTC iPod Touch competitor stand a chance at stealing PMP market share or is this another feeble attempt to take down a giant of mythical proportions?