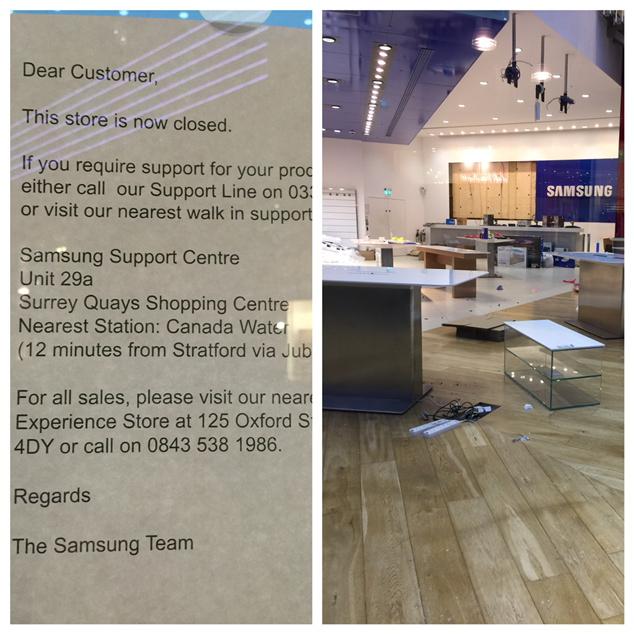 It’s not over until the fat lady Samsings. Photo: Najeeb Khan

Would-be shoppers at Samsung’s flagship store in London, England, were today greeted by a message telling them about the permanent closure of the outlet.

The store was located in the Westfield Stratford shopping center, and followed an Apple-inspired layout, with an open plan design, staff in blue shirts, and plenty of space to try out new Samsung products — many of which arrived there first, before going on general release.

The reason for the store’s closure most likely relates to the crashing business that is Samsung’s mobile division. Samsung posted dismal quarterly profits for its smartphone business, and has also wildly overestimated the appeal of its recent Galaxy S5, missing projections by 40-50 percent. Recently, the company fired three executives responsible for the phone as a result of its failure.

Samsung has additionally stopped selling its laptops in Europe.

Samsung says it remains “fully committed to the operation” of its remaining nine Samsung Experience Stores across the U.K. However, it’s undoubtedly a sobering announcement for a company that has previously splashed the cash with giant marketing campaigns and numerous pop-up stores. Especially seeing as Apple Stores are packed to bursting right around now.