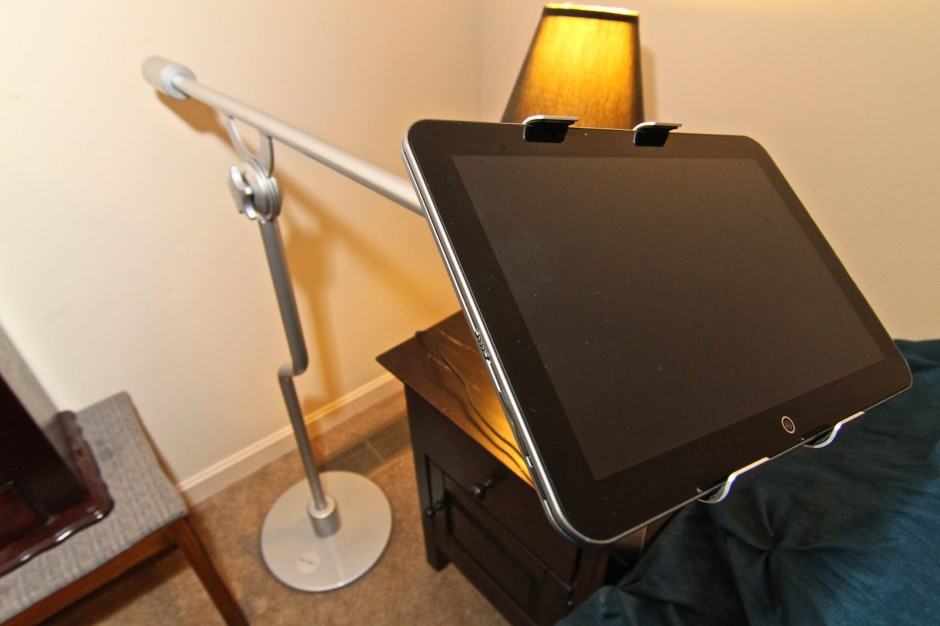 Tablets are fantastic little things, right? They entertain us, help us work, make life easier. But if distilled down to its purest essence, a tablet is simply a personal computer neatly tucked away behind an exceptionally portable screen. And if that’s true — that what makes the tablet so amazing is an amazingly portable screen (that, unlike a phone’s screen, is big enough to actually use for things like work, and movies) — then the fully-articulated Flote m2 tablet stand must be the most fantastic accessory you can buy for your tablet. Why? Because it delivers on the promise of being able to position a tablet screen anywhere and any damn way you please. With a few caveats, of course. And if you can afford it.

Actual fights broke out in my house over who got to use the Flote m2 — that’s how invaluable the m2 felt. Imagine reading a book in bed while lying on your side; or lying flat on your back on the couch while typing out a paragraph with the keyboard on your lap while the screen is suspended in space above you; or setting your tablet next to your desk so it’s a perfect eye-level second screen. I used the m2 in all these ways, and in each scenario it performed perfectly. There are probably dozens of other roles the m2 would be perfect in, but didn’t test — karaoke aid, teleprompter, workshop stand, etc.

The reason the m2 works so well is its wide range of articulation. The clamp system attaches to the arm as a ball joint, and is held in place via a powerful magnet. The arm can extend (theoretically — see below), and articulates vertically on the main post. The whole thing is then attached to a main post that rotates in its base. Everything is over-built and industrial-strength.

The spring-loaded clamp system simply pushes apart, and held securely pretty much every type of tablet I threw at it, including tablets, mini tablets and e-book readers. The m2 had issues with the clamp’s first set of rubber feet, in that they sometimes didn’t stick properly to the clamp ends.

Flote has since fixed the problem though, and the new feet eliminate the issue because they slide over the clamp ends like tight-fitting socks. They also cover the ends completely, which theoretically protects your tablet from being inadvertently scratched by any part of the clamp end not covered by the adhesive feet in the earlier versions (if you have an early version with adhesive feet, Flote will send you the rubber “socks” at no charge).

Because the clamp system largely leaves tablet rear edges unobstructed, the stand can also be used as video/photo platform — at least, with most tablets.

The biggest drawback: Because of its heft, the m2 didn’t move around as much as I would have wanted it to (one other reason it didn’t move much was the fact that trying to wrest control of it from anyone else using it was like trying to bathe a cat — dangerous and likely unsuccessful). Shifting it from, say, bedside to couch meant awkwardly dragging it around. The dumbbell-like base is equipped with supposedly slidable feet, but they didn’t feel very cooperative.

At $300, the Flote m2 is also seriously expensive. I also wasn’t able to extend the arm like I should have. This was an aberration (Flote says the arm should indeed extend), and frankly I never found an instance where I missed it. Nonetheless, a malfunction is a malfunction.

The Flote m2’s over-engineered frame feels like it was designed for heavy, industrial use — perhaps in a hospital, a factory floor, or a restaurant. Which makes sense, given its price tag. If you’re buying one for the house, the extra burliness simply means it’ll probably outlast you. Either way, as long as you have the budget, the m2 will create all kinds of new ways to use a tablet. Flote also makes a smaller, less expensive desktop stand. 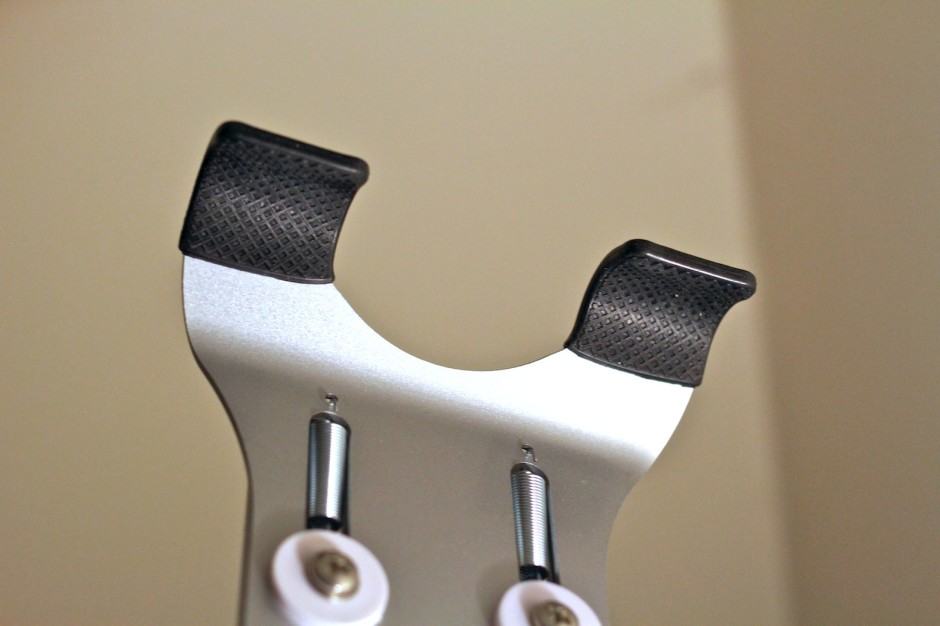 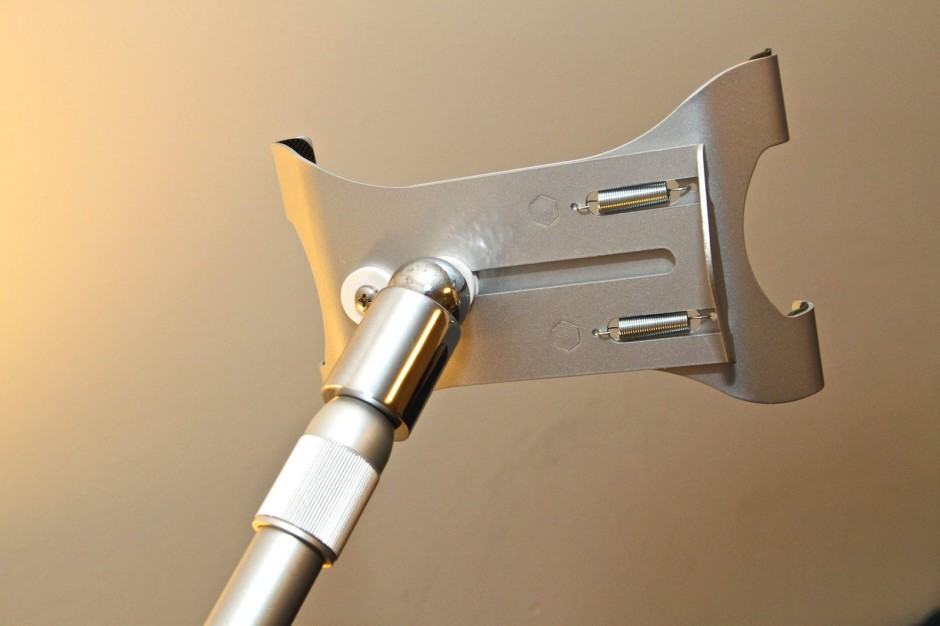 Rear view of the clamp mechanism. 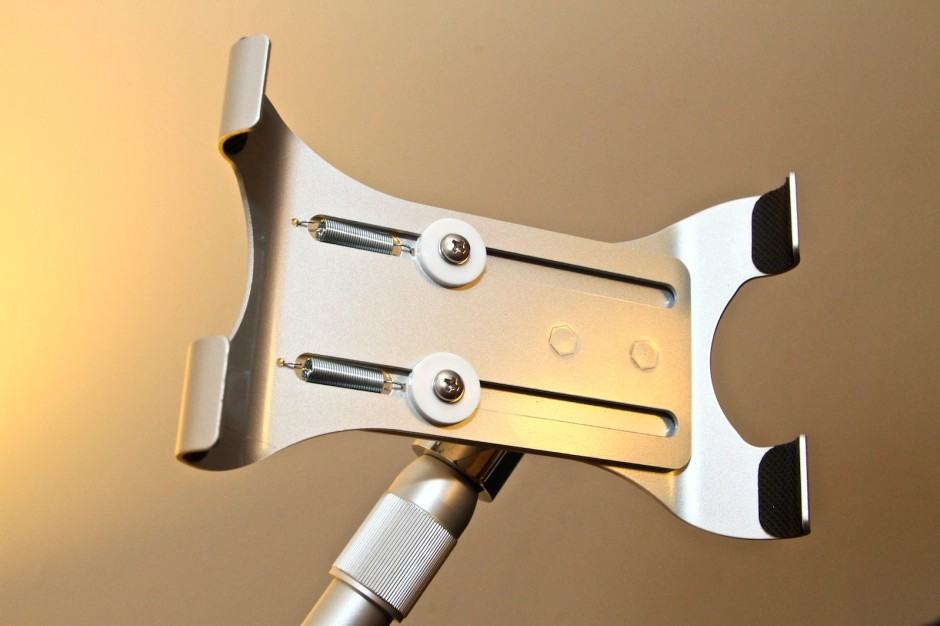 Front view of the clamp area. 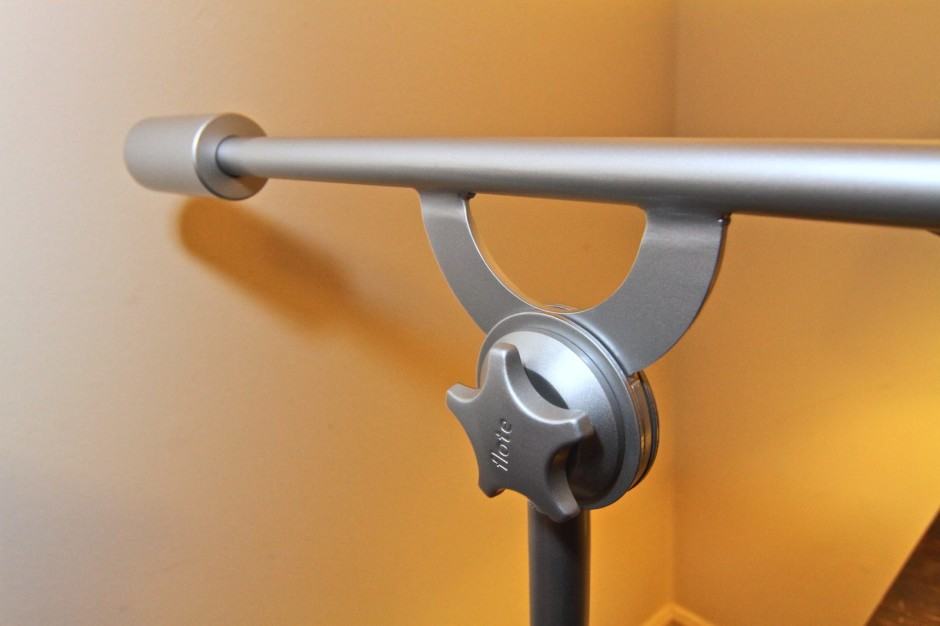 That nut keeps the arm vertically secured. Note the handsome satin surface on the m2.